This project was started as an initiative by Linneus University and their work towards their sustainability goals Agenda 2030, set by the Swedish government. This goal permeates tall operations at the university and affects what they teach and how they work. In this project we were given a the task to create an application to visualize the effect our actions have on the climate.

The university can only measure a part of their operations (as CO2 emissions in certain areas) and lacks information about students attitudes towards sustainability. We wanted to fill this gap and involve students in the data by making them our target group and involving them in the design process. This project involved several participatory design and co-design methods for UX research.

How can we influence students attitudes towards the climate, and motivate them to make more sustainable choices?

An application were you can log and track your sustainable actions. In the app you can compete with friends and arrange challenges as well as seeing your own progression over time.

This project was conducted for educational purposes during my academic studies at Linnaeus University. 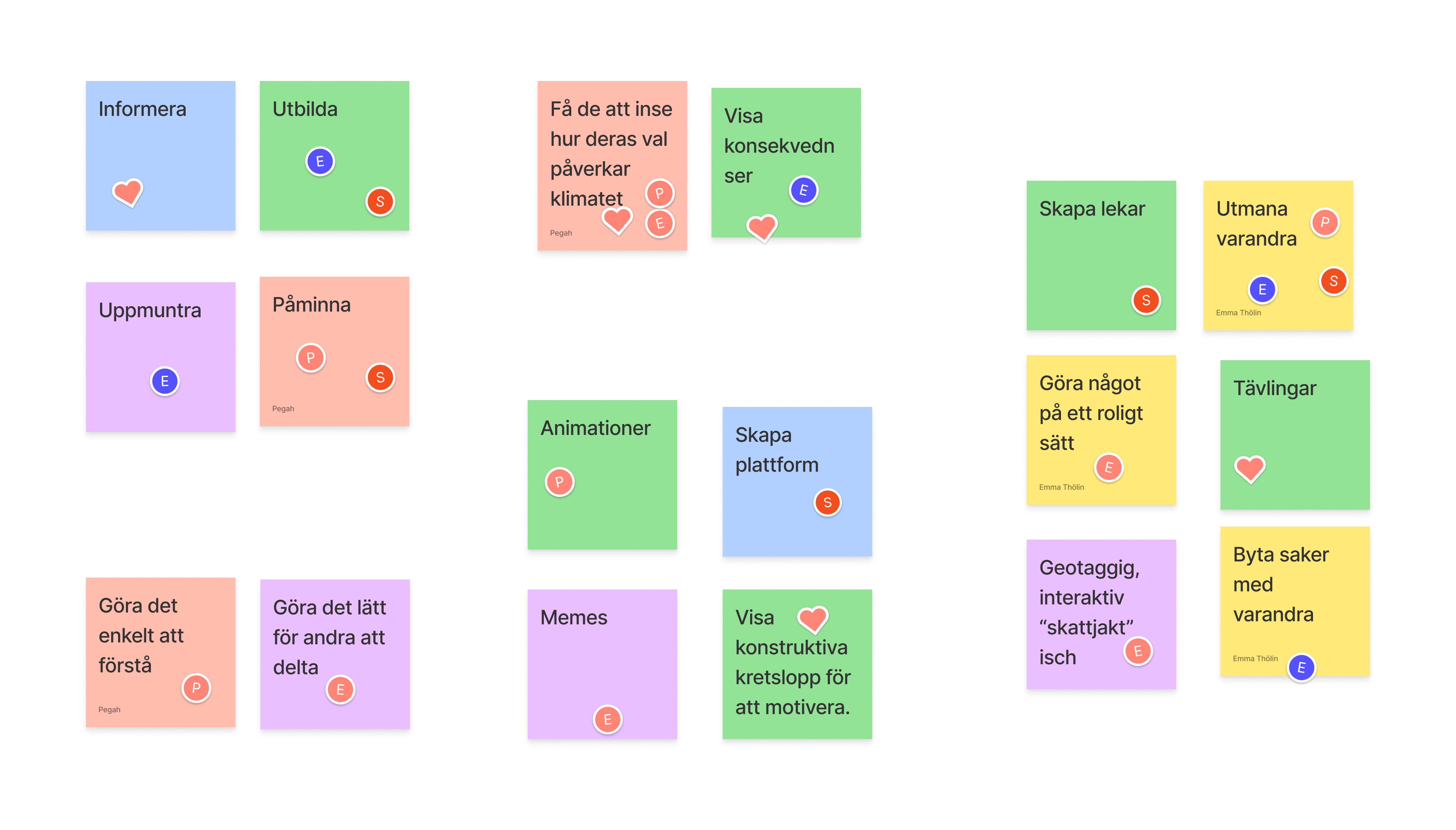 To make more sense of our problem and to have a starting ground the designteam started the project by conducting a brainstorming session. In this session we used three questions as starting points:

After the group discussion we categorized our answers in to general themes to get a better picture of the potential problems we were facing. Our answers and themes were then used as a guide to how we conducted the future workshop.

For our competitive analysis we looked at 8 different applications that are used today to measure peoples sustainable or carbon footprint. The applications were analyzed by which functions they had, what thet measured, how they presented data and the general look and feel of them. The findings of the analysis also impacted what we wanted to find out when involving the users. 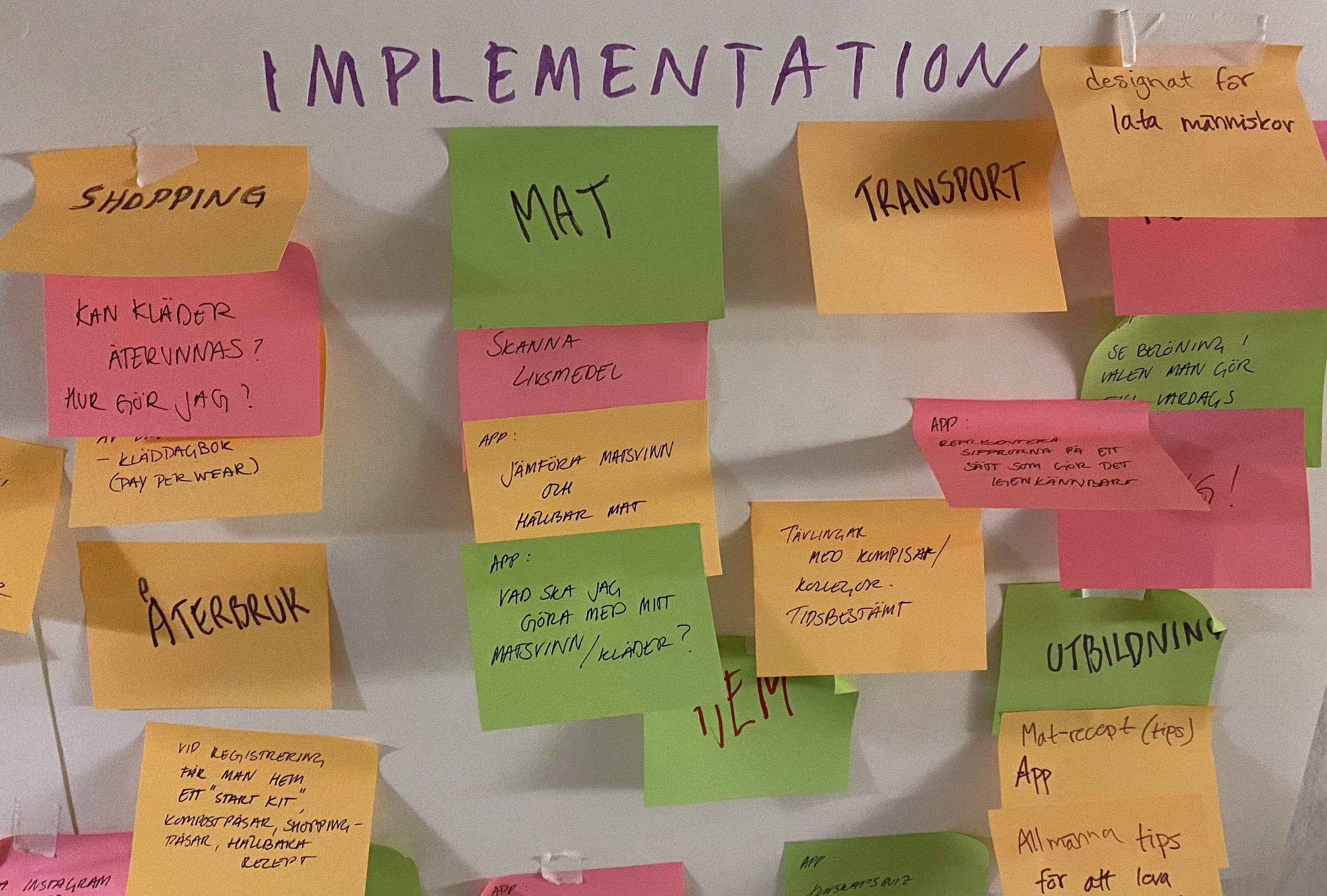 To involve two of our user groups, university students and high school (gymnasium) students we conducted 2 separate future workshops. The goal was to:

From the workshops we analysed the data into categories of what the users were mainly interested in.

To involve the stakeholders of the project, Linneus University, we held a focus group together with two representatives from the university that were sustainability coordinators. In this way we could ask questions and start conversations about what the university does today and what kind of knowledge or data they wished they had.

After our initial discovery phase we conducted a functional analysis with the purpose of compiling our data into actual functions. From the collected data we created different categories of functions we wanted to include in the app. These were: 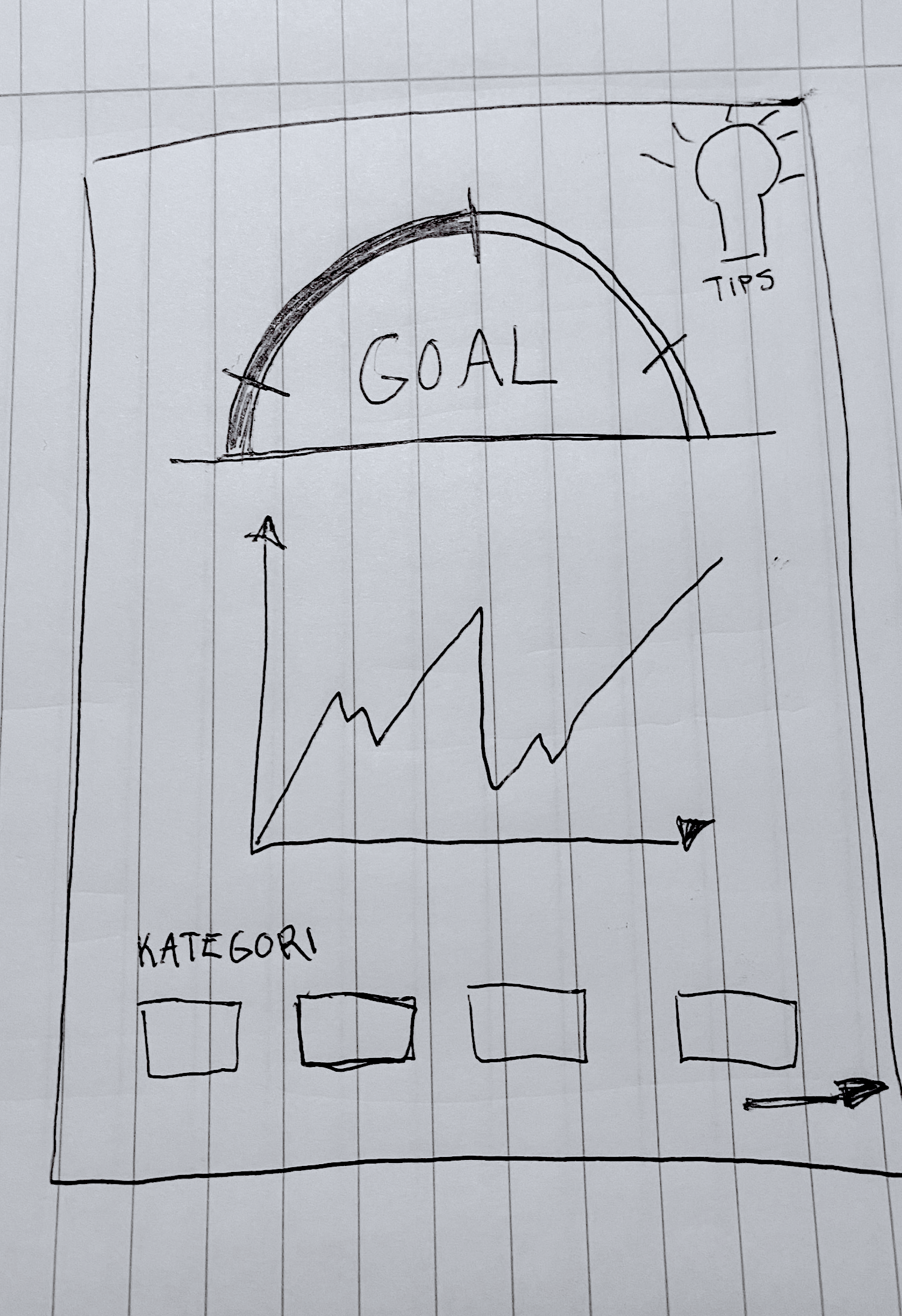 To involve our users more in the process we conducted a brainstorming session where the users got to sketch their ideas of how the interface could look and how they wanted the data to be visualised.

They participants were given three different concepts to sketch:

After having the sketches we began to write a list of functions that we considered necessary, this list was later used to create a sitemap. Our sitemap gave us a better overview of the pages that needed to be created and the features on each page. 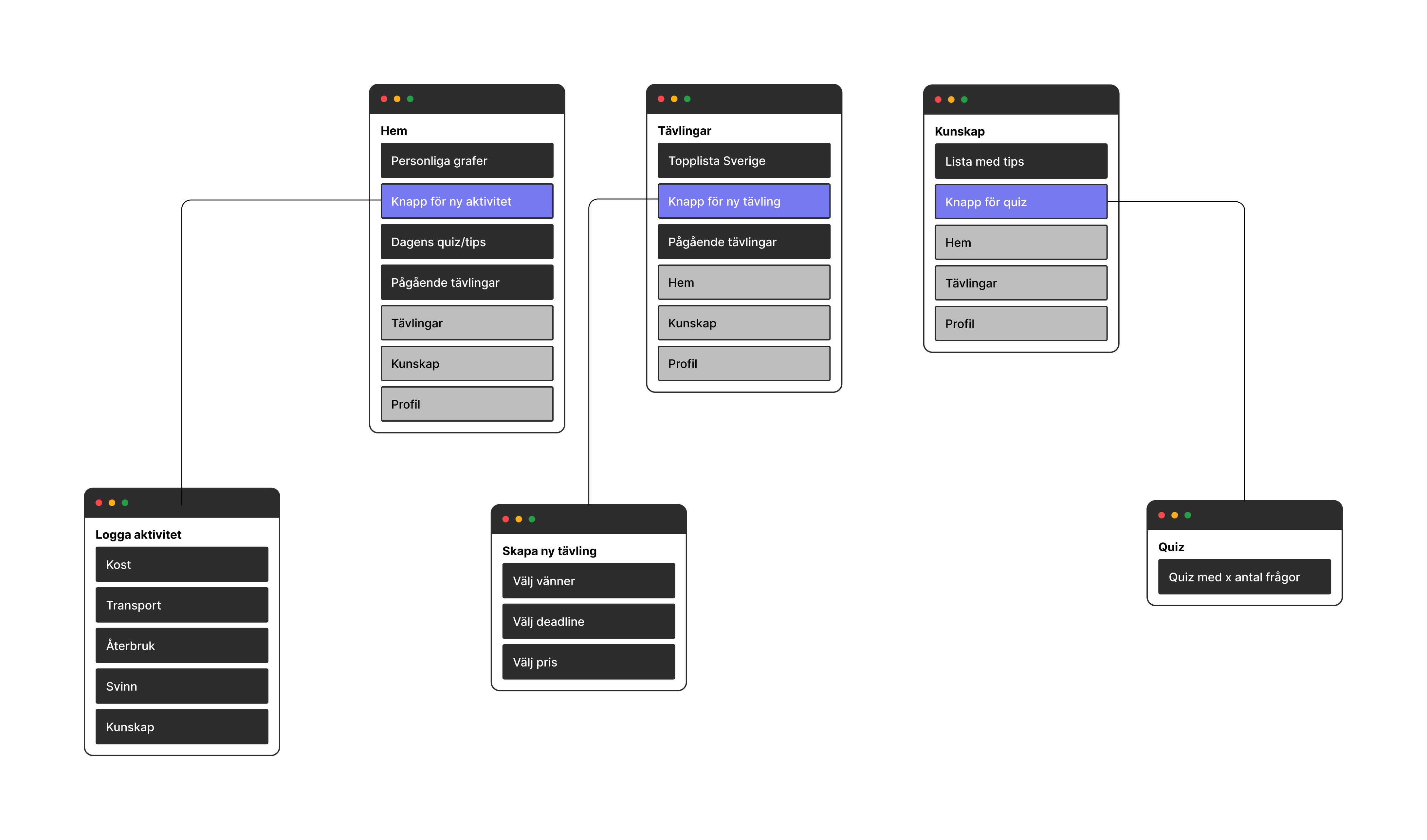 Two people in the design team created their own version of the wireframe. These versions were then compared and combined to a common wireframe based on the best ideas on each version.

Later on in the process we moved up to a higher level of fidelity by working on the style guide and interactivity through Figma. Since the content was information heavy, we wanted the interface to have a playful design with a clear structure to simplify the user experience, to do so we paired a round, more playful font with a simple and minimal sans-serif font. Additionally we added soft color tones and emojis to create a fun experience.

To test our prototype we conducted two different usability tests. During the tests the users followed a use case with different tasks. We used the method "Thinking aloud" which meant that the user talked through their actions and thoughts. The test was followed up by some questions about how the user felt using the interface.

During the first test the users gave us feedback about what was good and what could improve. The feedback was then made into a list of things to change about the interface and products.

These changes were made before the second user test.

In the second test the users followed a new use case with tasks adapted to the feedback and changes made. After the completion of the use case the users filled in a System Usability Scale (SUS) to evaluate the usability of the app. The score of the SUS 83,1 which is considered an excellent result. This score must be taken with caution since there were only four participants conducting the test.

What I've learned from this project

Since this was a school project the main goal was to conduct user research and work with participatory design methods. This concept could definitely be developed further and would need a lot more work to actually be implemented.

In this project I have learnt to plan and conduct UX research in the form of workshops, usability testing and other co-design activities. I have also understood the importance of an iterative process and to conduct user tests early in the process in order to identify pain points quickly.