The process of starting, enduring and transitioning from a weight loss journey is an emotional experience where issues of information overload, stagnation and confusion can arise. Moreover, the time and energy spent figuring out why weight loss isn't happening creates frustration and wreaks havoc on one's confidence.

How might we help to provide the tools for people to establish and maintain a diet that works for their lifestyle?
1
Research
2
Synthesis
3
Design & Ideate
4
Test

The industry is saturated with different diets, products and methods for weight loss when there's money to be made. This includes the variety of applications that have come to fruition in response to peoples’ great desire to lose weight. A lot of the solutions available today are either too overwhelming with information overload or too underwhelming and do not set the user up for success from the start. We look to meet the user in the middle with their needs and set them on the right path to success, self-empowerment and accountability.

To understand the problem scope and the dieting experience, I conducted an online screener survey that had 8 respondents and selected 5 people to continue on in semi-structured interviews to learn more about their experiences with their journey with weight loss. 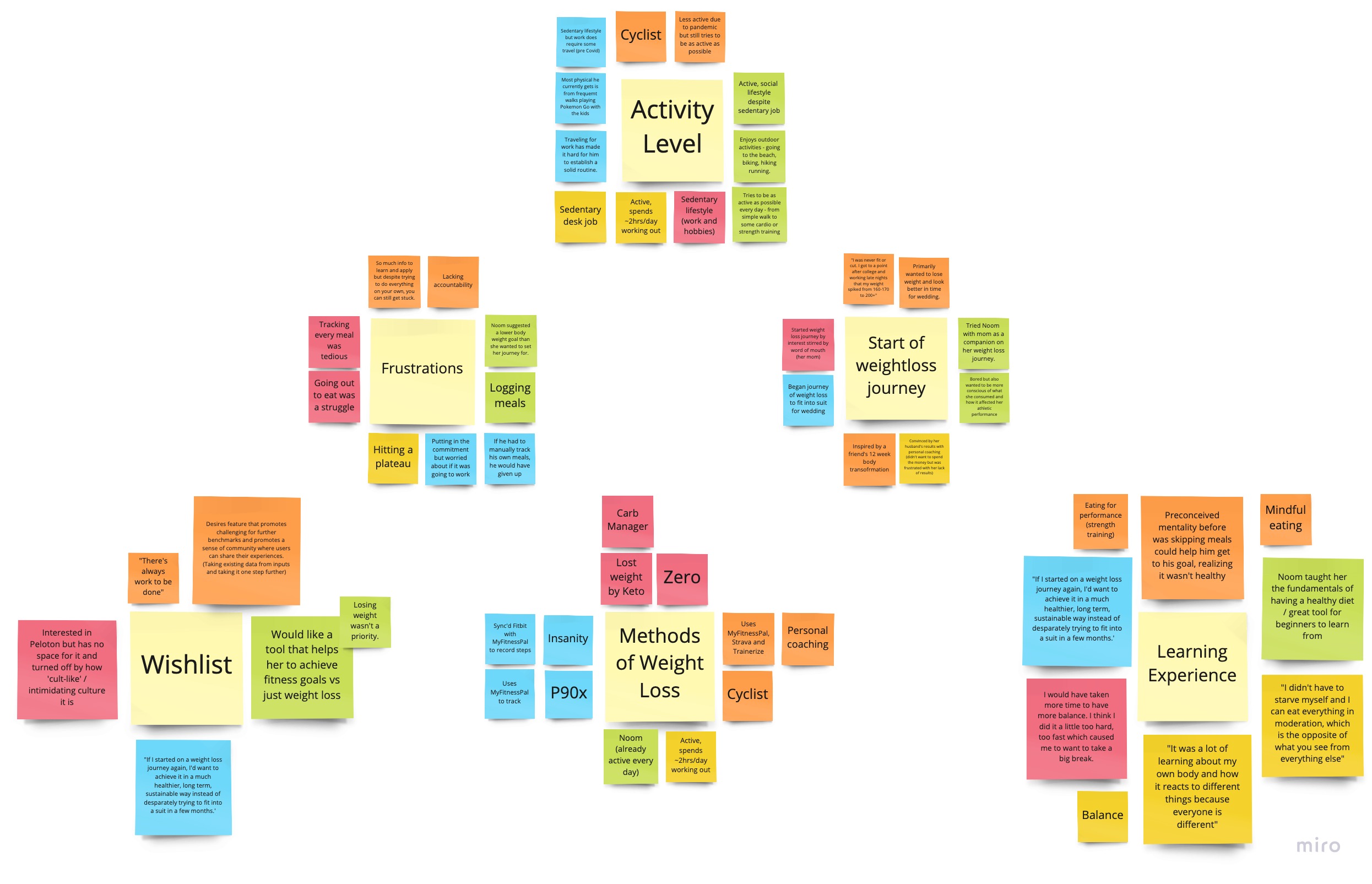 After conducting user interviews, competitive analysis and creating our user personas, I decided on three flows that I'd like to focus on in this mobile app concept to address the frustrations and needs of our potential users- onboarding, weekly check-in and post goal completion. 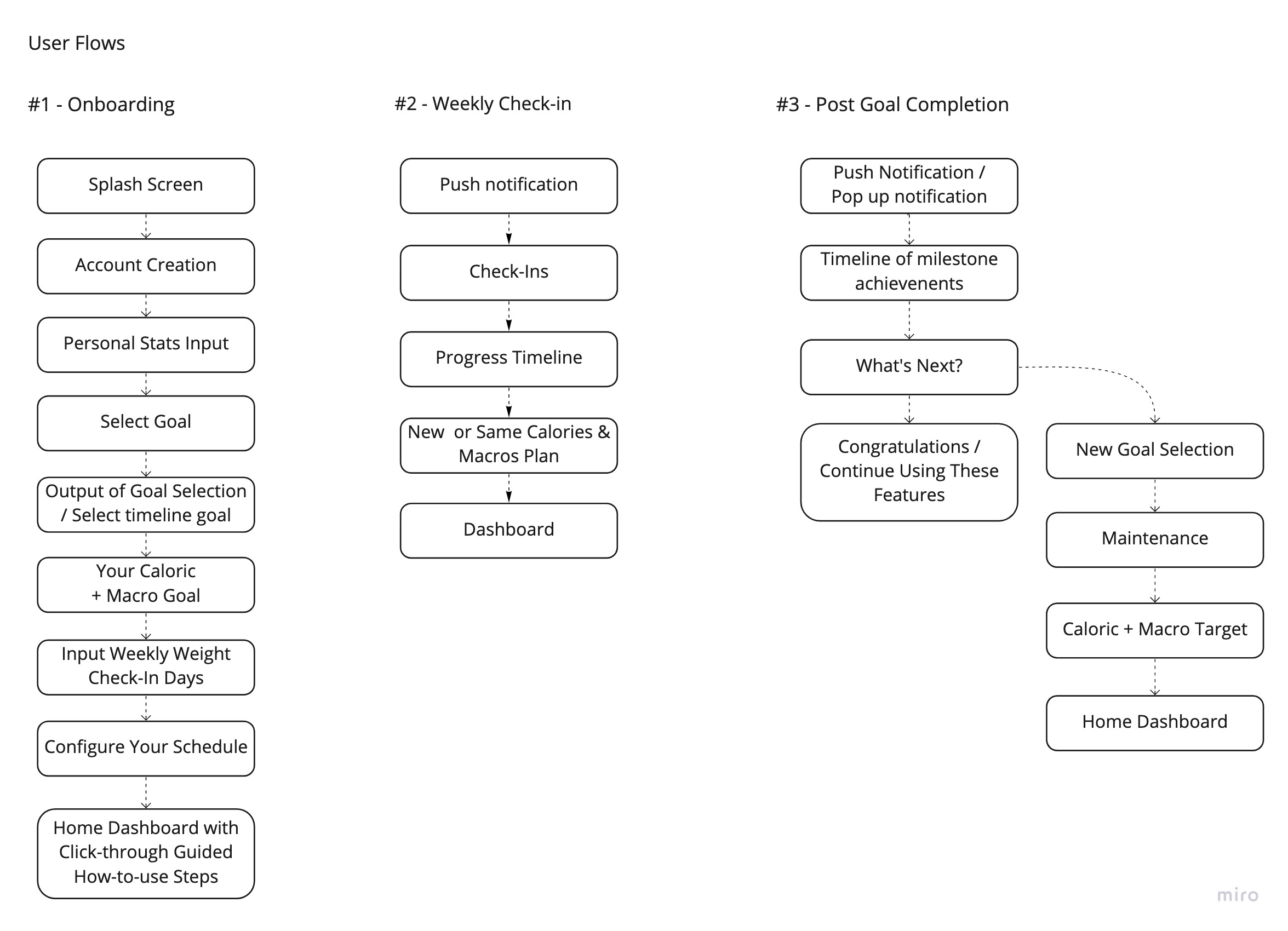 To quickly test the concept, I created paper prototypes that demonstrated the key user flows. The paper prototypes allowed me to brainstorm solutions for three paths I wanted to focus on without overextending.  I conducted guerilla usability tests using the paper prototypes to further iterate on any changes I should make when moving into the mid-fidelity wireframe stages. 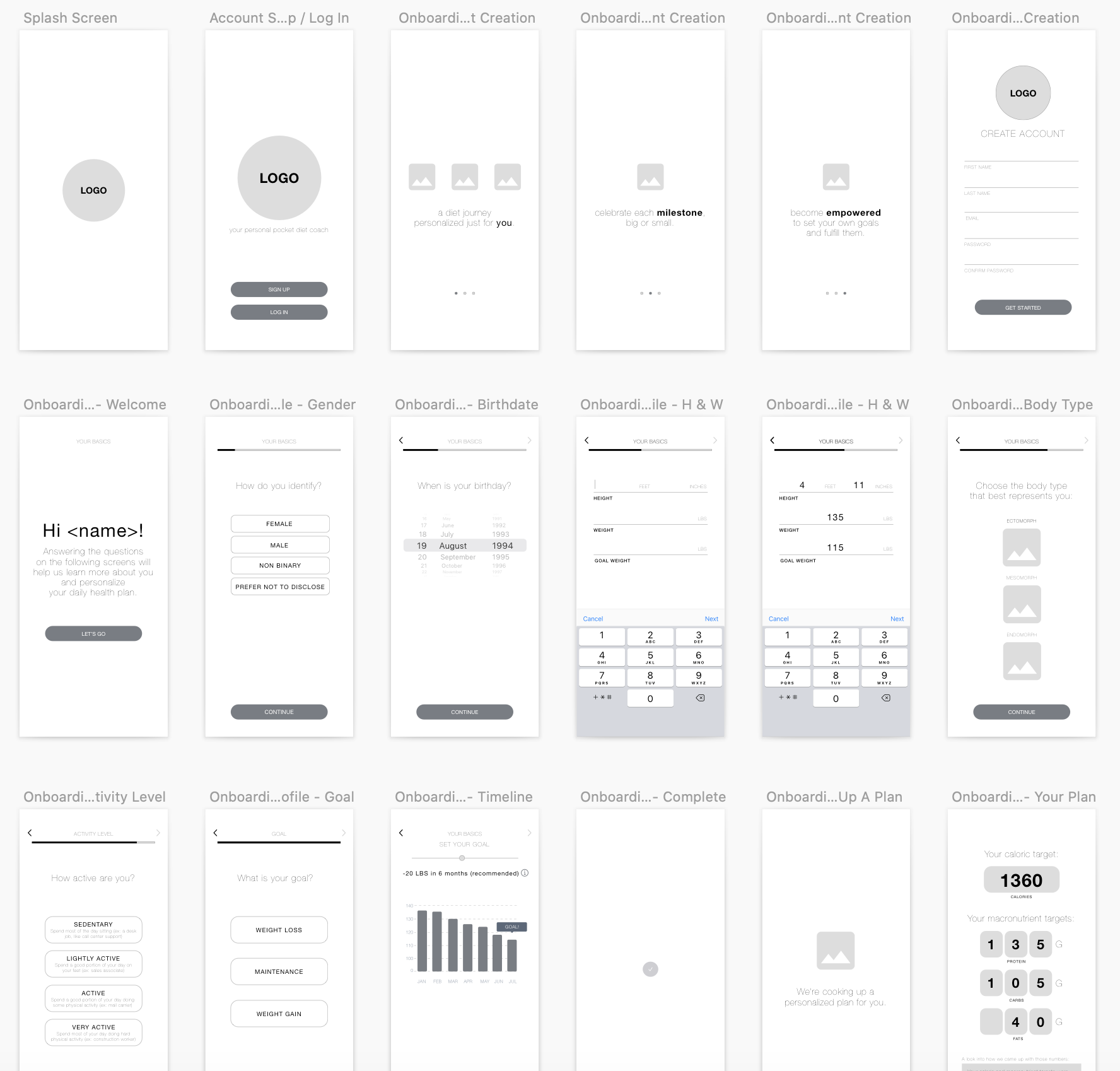 Sketches then translated into digital form on Sketch through mid-fidelity wireframes to better convey the design from screen to screen.

I started designing high fidelity prototypes after creating a style guide for the user interface and determining major design components of the app. Sketch was used for UI design. (See below video for style guide. There is no audio.)

The inspiration for starting on a weight loss journey varies from user to user. However, the confusion that comes in where to begin is a common complaint that users share, particularly those who are new but also to those that have become stuck in the journey.

The onboarding process on HABEAT consists of:

Accountability is a cornerstone of success when it comes to dieting strategies. The solution for lack of accountability was explored in the form of weekly check-ins. The weekly check-in process on HABEAT begins with a notification that motivates the user with a positive message and prompts the user to check in for the week.

As mentioned previously, users have different motivations to embark on a weight loss journey. Thus, having the option to sustain the accomplishments of their weight loss journeys or make progress otherwise should be a staple feature in a dieting coach app. A majority of the users we interviewed stated they gained back the weight they lost after going on a diet because of the lack of accountability.

To aid in the user's ability to sustain their lifestyle while keeping the weight off (or making further progression), post goal completion focuses on that transition by:

After prototyping my wireframes, I did a testing round in order to reveal possible usability problems. Due to Covid-19, I performed user testing remotely with the users.

However, all of the users shared many of the same positive sentiments.

HABEAT is a mobile app concept that aims to simplify the experience of embarking on a weight loss journey, from start to finish.

To solve the problem mentioned above, I designed HABEAT to alleviate the user's common issues from starting to completing a weight loss goal. Due to the constraint of time, I focused on 3 key features of the app.

Overall, I feel that I was able to successfully build a mobile app concept that really answered the major frustrations and basic needs of my targeted audience and their journey of weight loss.