A complete redesign of the Later's core scheduling user interface

Scheduling posts is a core workflow for Later customers. There are over 70k posts per week just on Instagram alone. Over the last few years, numerous features have been added to the post modal as Instagram continues adding new scheduling related features.

The Product team decides this is the time to redesign the modal. The primary focus is to optimize the workflow for our customers. However, the other benefit is to create a scalable design to accommodate additional features in the future.

The post modal has remained the same since its original design. Minor visual changes are done to accommodate new features. With this approach, we have accumulated UX debts over the years. Important features have become increasingly difficult to find which leads to usability issues. 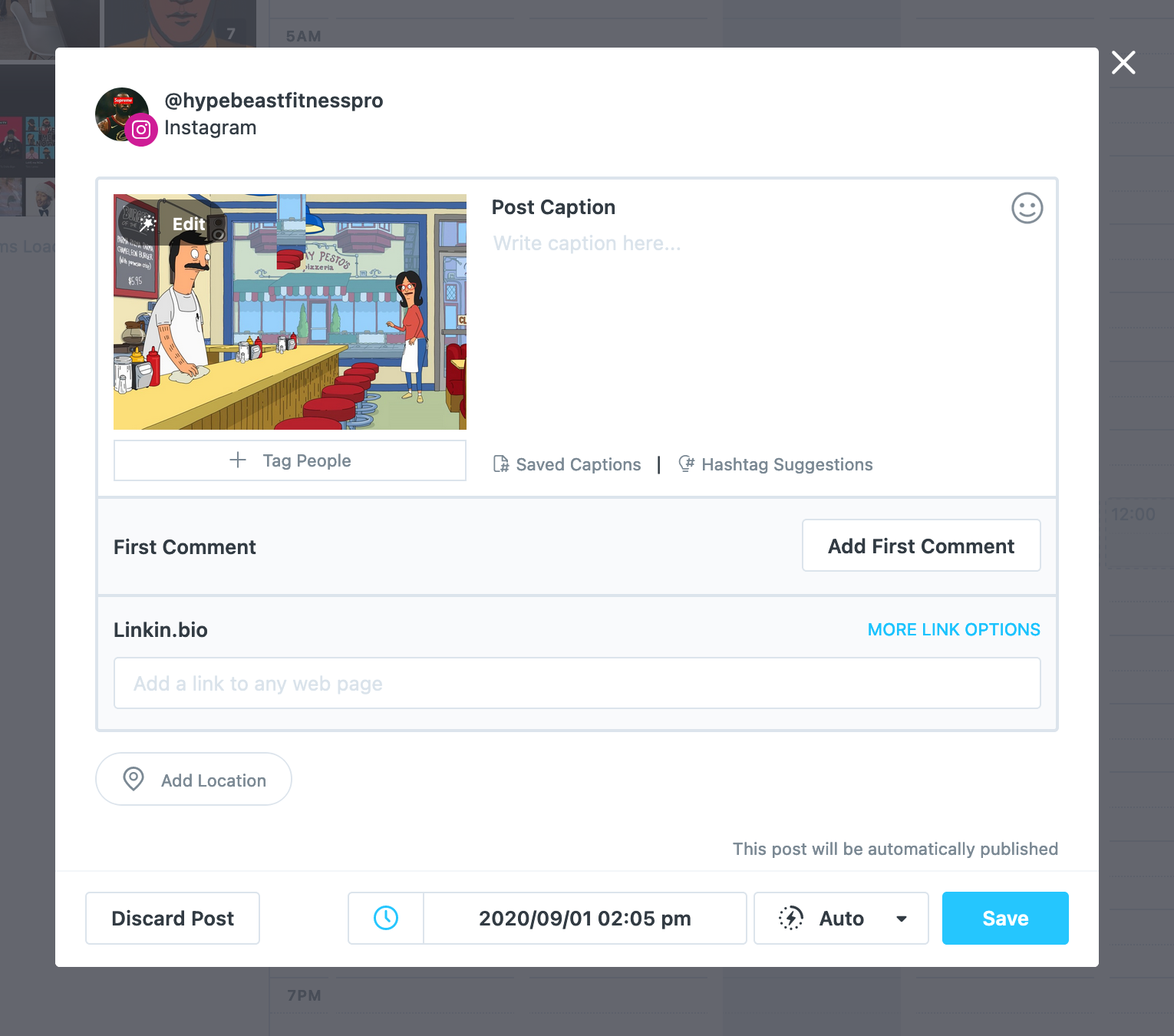 I have summarized a list of usability issues based on two sources. One is by the customer support team. They track and label support tickets that are related to usability. Second, it is based on heuristics evaluation. 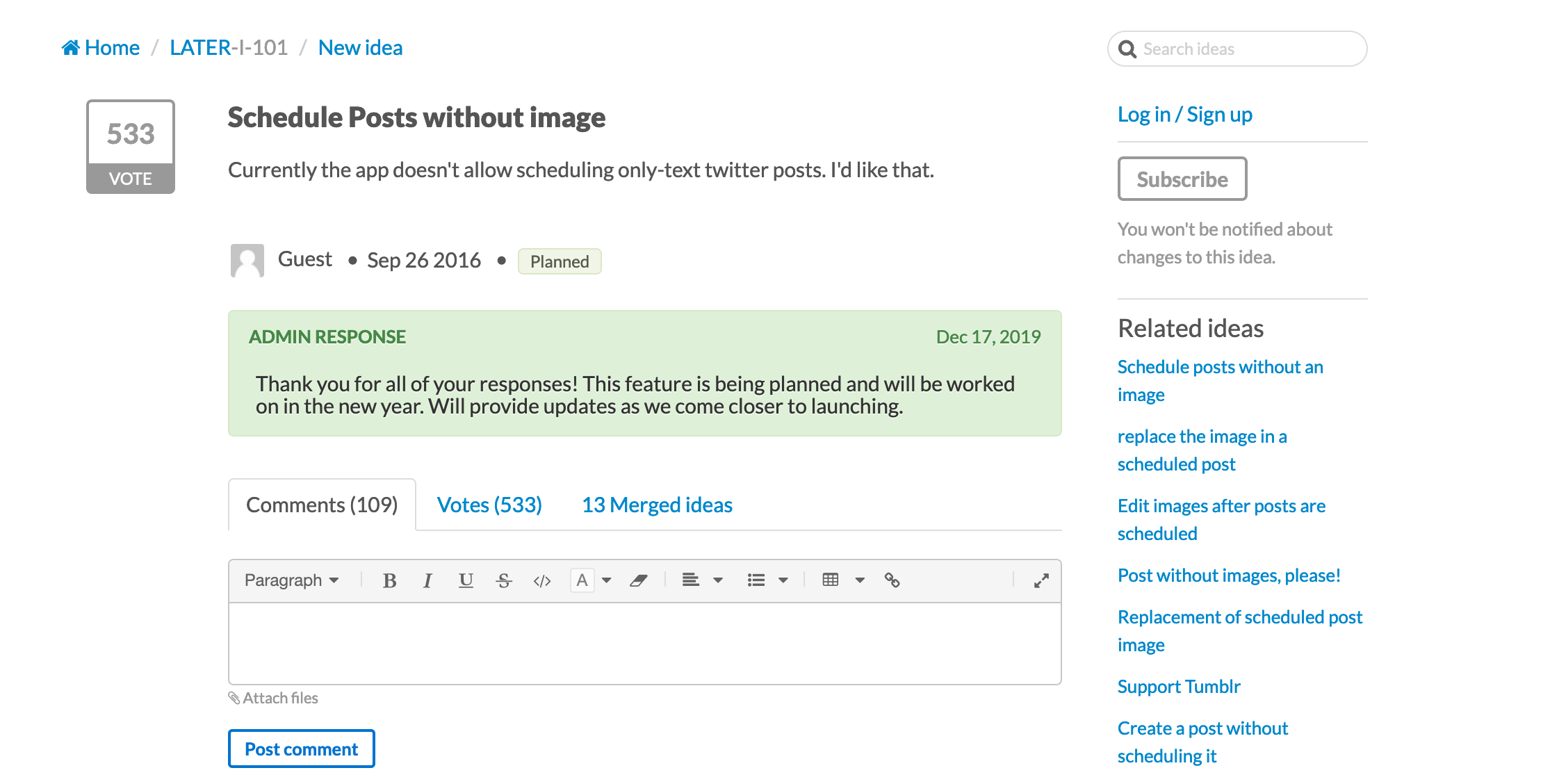 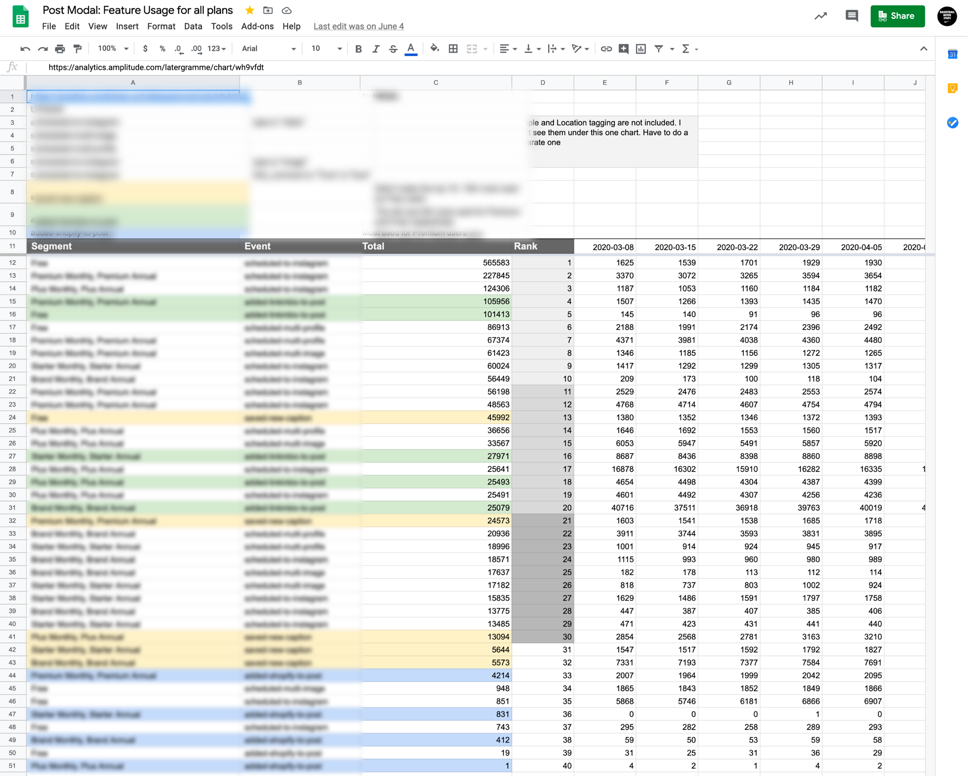 Right image: Feature usage data is exported to Google Sheets. It is easier for me to rank those events in Google Sheets. Data is blurred out on purpose ;)

Post modal is the core user interface of the scheduling workflow. It is important to get users' feedback as early as possible. UX designers, UX researchers and Product Visual Designers have come up with a plan for this project. The plan is simple. Test, reiterate, and repeat as much as we can.

Prior to user testing, the UX team and Product Visual Design team are responsible to present two to three concepts each. The objective is to generate as many concepts as possible. After the presentation, we consolidated into two concepts. It is easier to get feedback for two concepts from our users as opposed to five.

Key UX metrics, which are based on the objectives, have been set so we can create a baseline and track any usability issues. For example, the team monitors the usage of two Instagram publishing methods: Auto Publish and Notification. The success metric here is to increase the usage of Auto Publish as it has a positive impact on developing stickiness using Later. As for the baseline, the team uses the current Auto Publish usage. The goal here is to ensure the redesign does not have a negative impact on the current users.

As the lead UX designer, I developed the validation plan with the UX Research team and created all the clickable wireframes for the two rounds of user testing.

* The visual designers participate in all user testing. I will have a debrief with the designers to highlight the key issues that the users brought up. This type of collaboration allows us to work faster by avoiding the traditional handoff meetings.

The three UX designers including myself have spent a day brainstorming concepts. Each of us presents our concepts in a follow up meeting. Common patterns and directions have been noted. This way I can consolidate all these ideas into two concepts that can be reviewed with the Product Visual team. 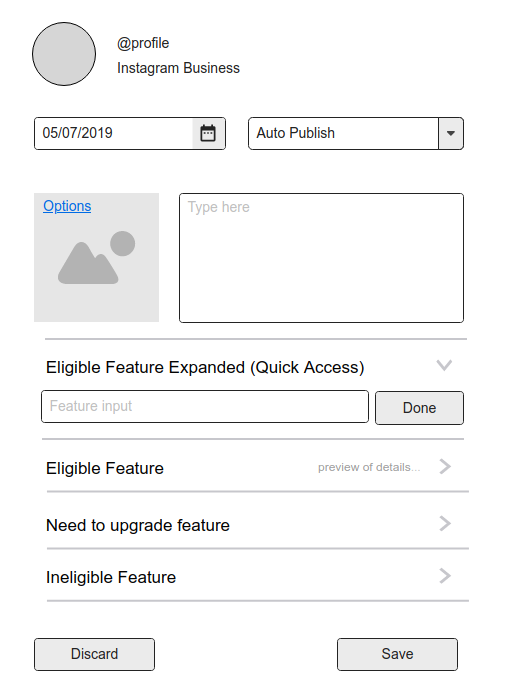 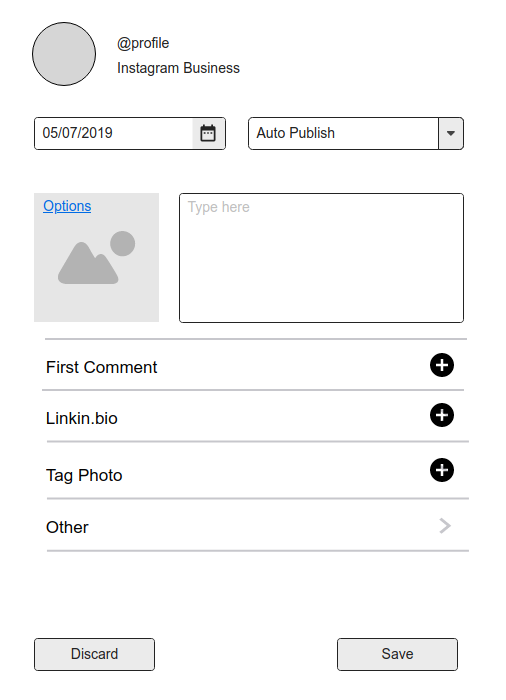 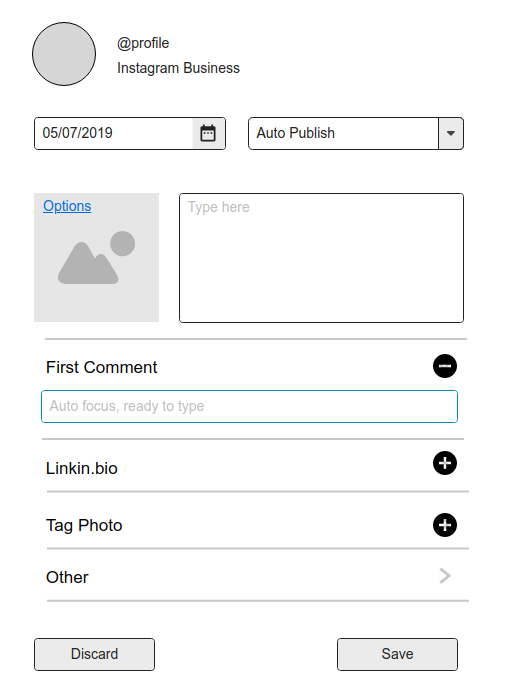 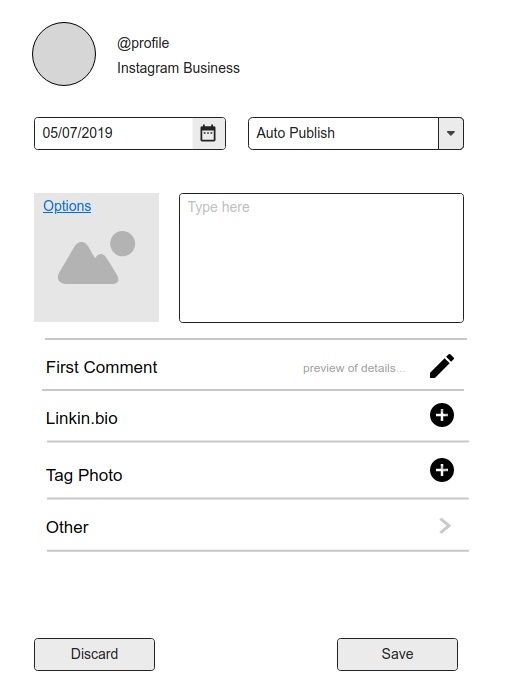 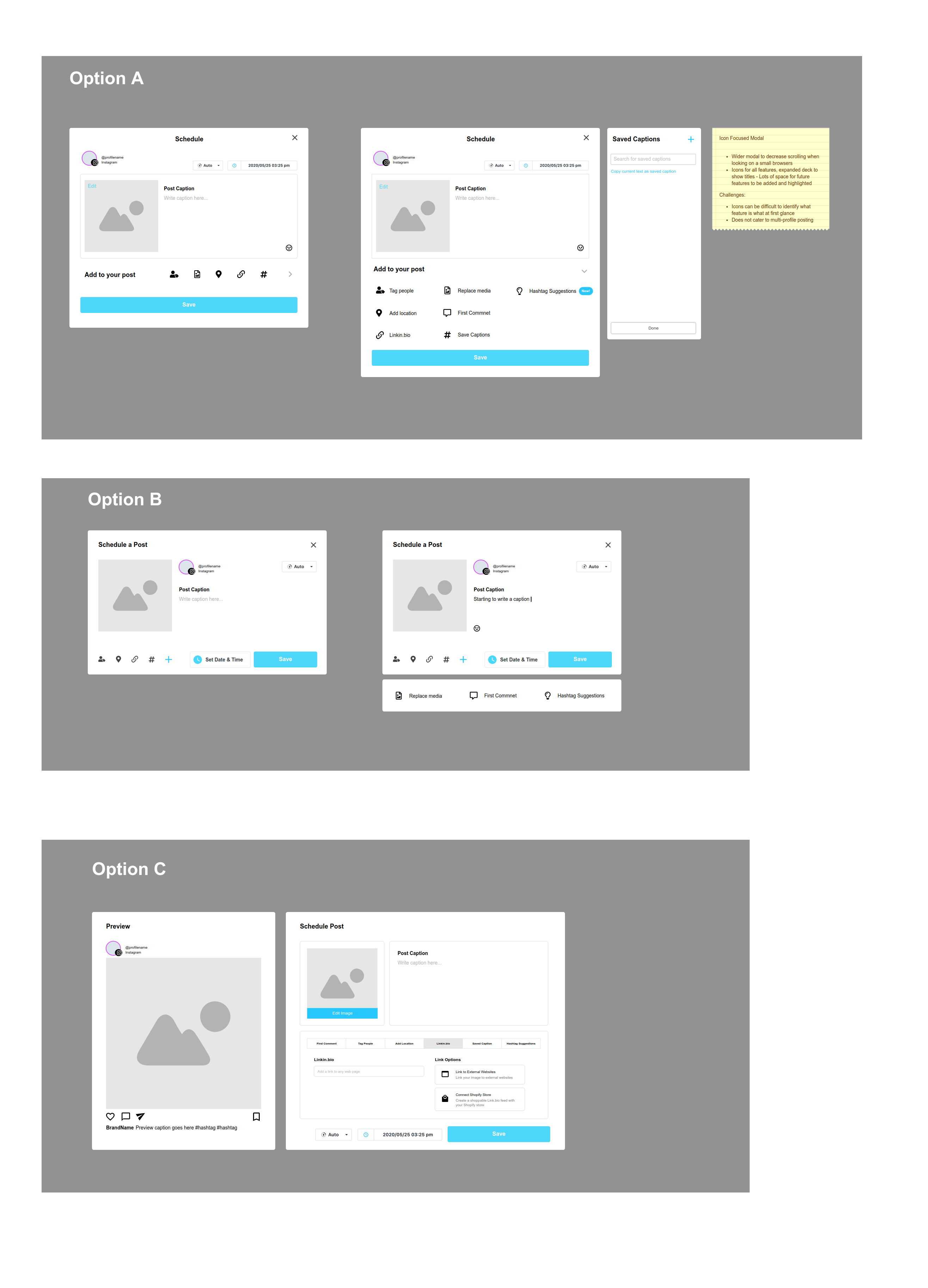 Details of the usability plan and concepts will not be shared due to NDA. However, we have recruited participants who we consider as active to participate. This is to ensure the feedback is useful.

Concept 2 of Option C is preferable. Here's a summary:

Based on the feedback, I work with the Product Visual Designers to focus on two areas:

With those in mind, we created two concepts to explore our options. One main difference is the position of the additional features. Details of the concept will not be shared here; however, I have included the cropped samples below 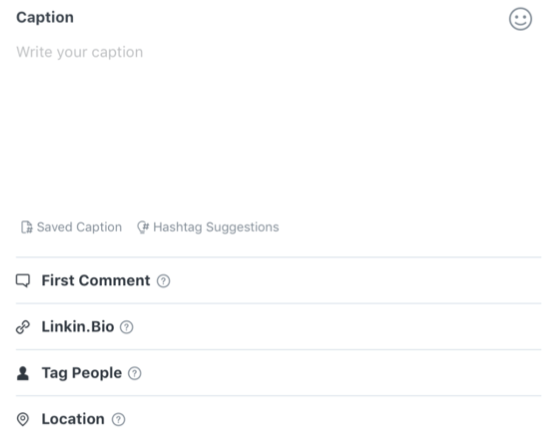 Additional features are located below the caption. The goal is to create a natural "top to bottom" workflow once they finished writing their captions. 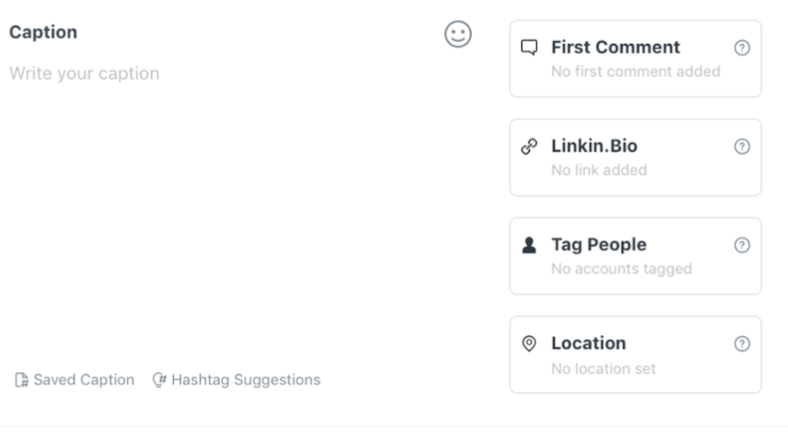 Additional features are located beside the caption. The goal is to maintain a natural workflow with no scrolling required.

The process is the same as round 1 with an updated concept. One of the new research goals is to identify the elements of post modal that are easy to use for users. This is to make sure we are meeting the objectives of this redesign.

Option 1 is preferable. Here's a summary:

Based on the findings, the team has decided to move forward with option 1 for the beta.

The beta is made available to our selected beta users. We have waited two weeks before reaching out for feedback to ensure users have adequate time to try the redesign post modal.

The overall experience is positive. Beta users find the redesign is more simple, clean, and easy to use. Here are some highlights of the result:

* The first week post creation time of the redesign modal is longer than the current design. It makes sense as users are learning the new design. There is a trend in time reduction week over week until week three, in which the time is stabilized

Due to the positive feedback from our beta users, the redesign is released to the remaining users in the following weeks. The team is happy with the result and excited that we have created a foundation to accommodate future features while solving the common usability issues from the previous design. 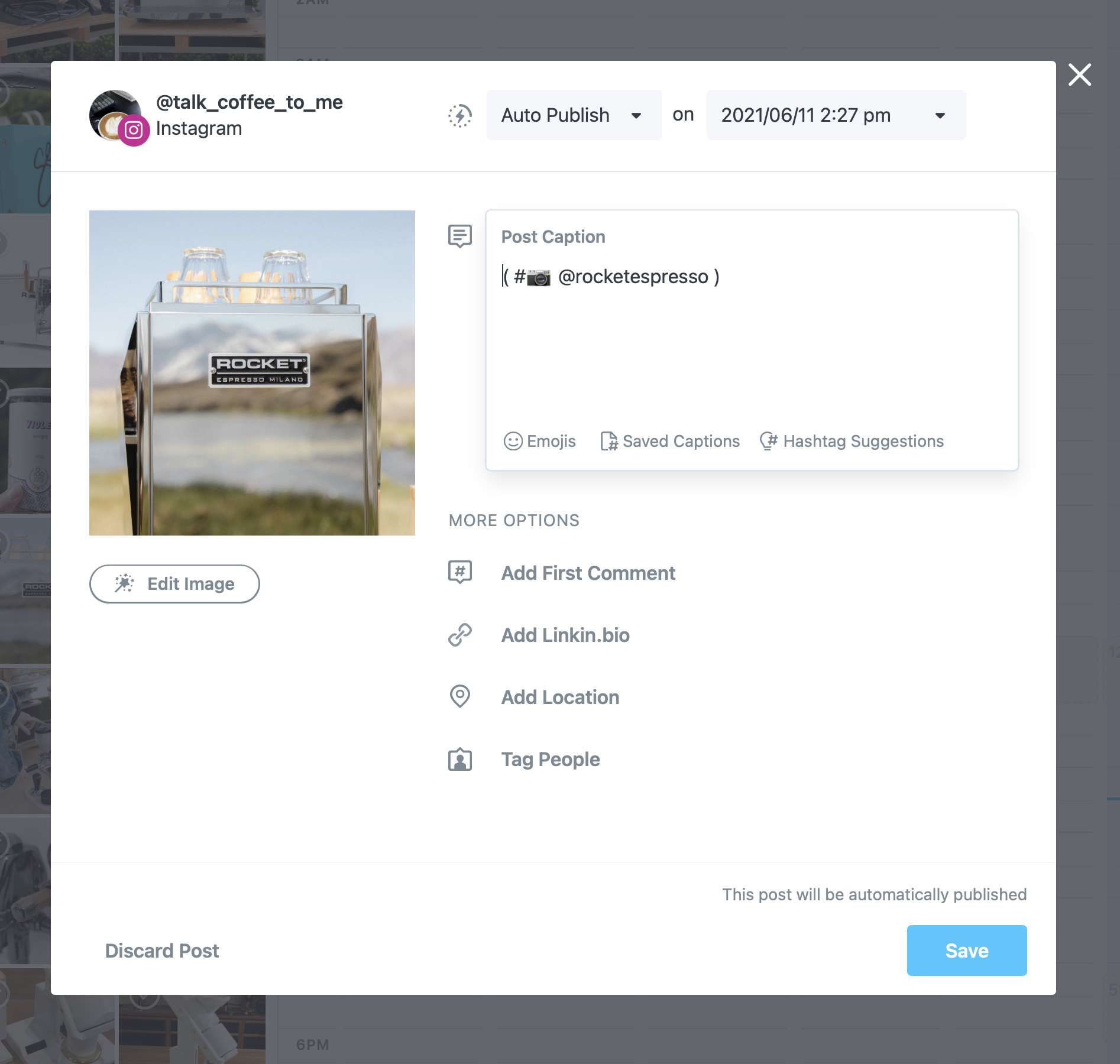 Try it on Later.com