What do our users want, need, and expect?

This page covers the Research Phase of the Upscape Hotels case study. Use the numbered navigation below to skip to the methodologies I used, or scroll down to first read about the full project and the challenge presented.

Upscape Hotels, my (fictional) client, is an international hotel chain based in the U.S., newly formed through the acquisition of existing brands and independent hotels—each with its own website. They wanted to unify the chain identity and create a consistent user experience across all their properties by building a comprehensive website from scratch. They sought "to create an online booking experience that is simple, accessible, and based on a deep understanding of [their] target users."

Our (fictional) firm created two project teams, one for mobile and one for desktop. I researched and designed the booking pathway for the desktop team. My end products were a clickable medium-fi prototype and a set of annotated wireframes, ready for a developer and a UI/visual designer to bring to life.

What did I do?

My role was limited to the desktop version of the site and focused specifically on the hotel booking process: how users search for and book hotel rooms online.

To create an online desktop booking experience that is simple, accessible, and based on a deep understanding of our target users (leisure travelers). 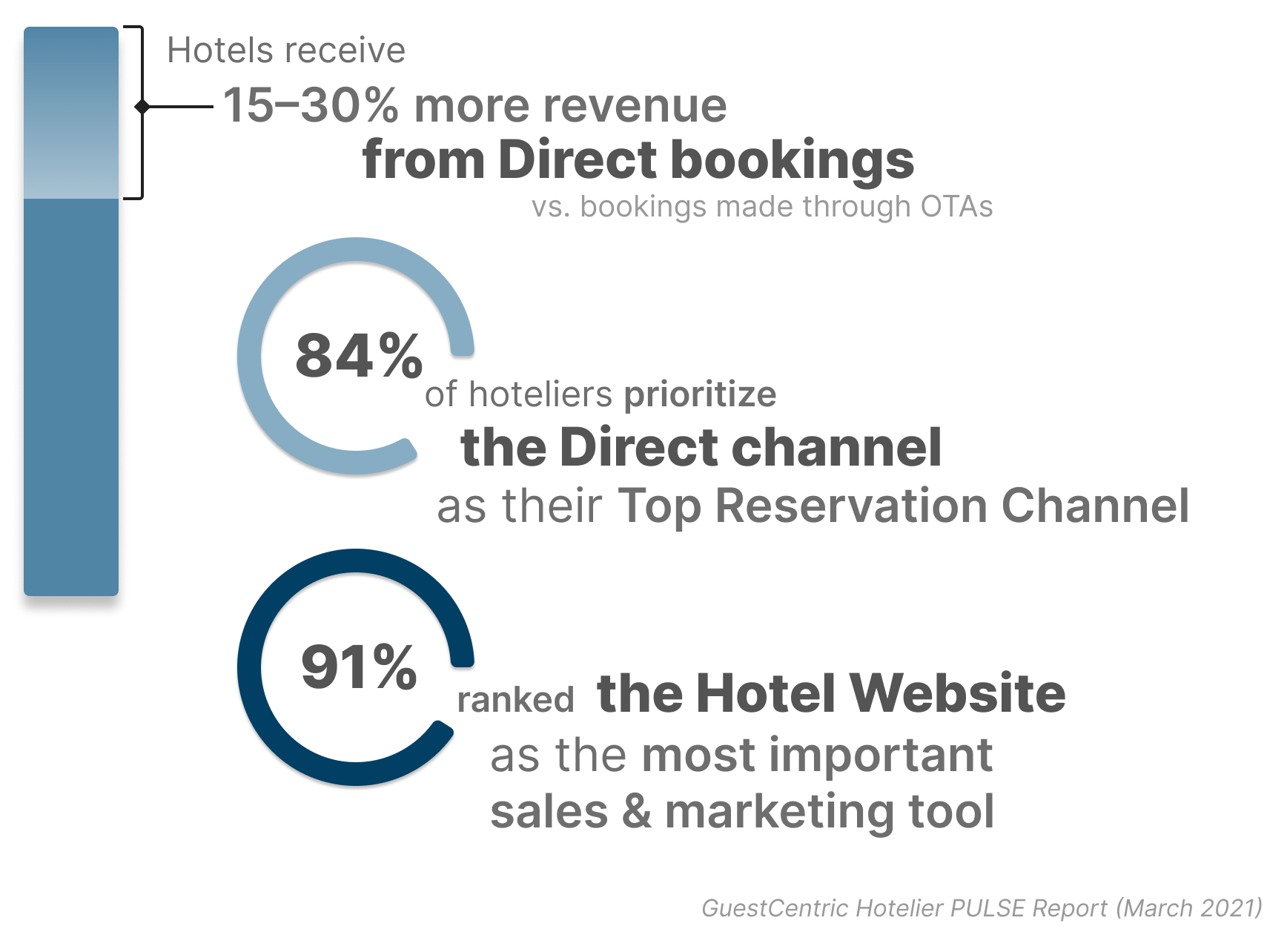 To maximize revenue through Direct bookings, a hotel chain must have its own booking website

Direct bookings gained market share over OTAs even as the COVID-19 pandemic decimated the travel industry. 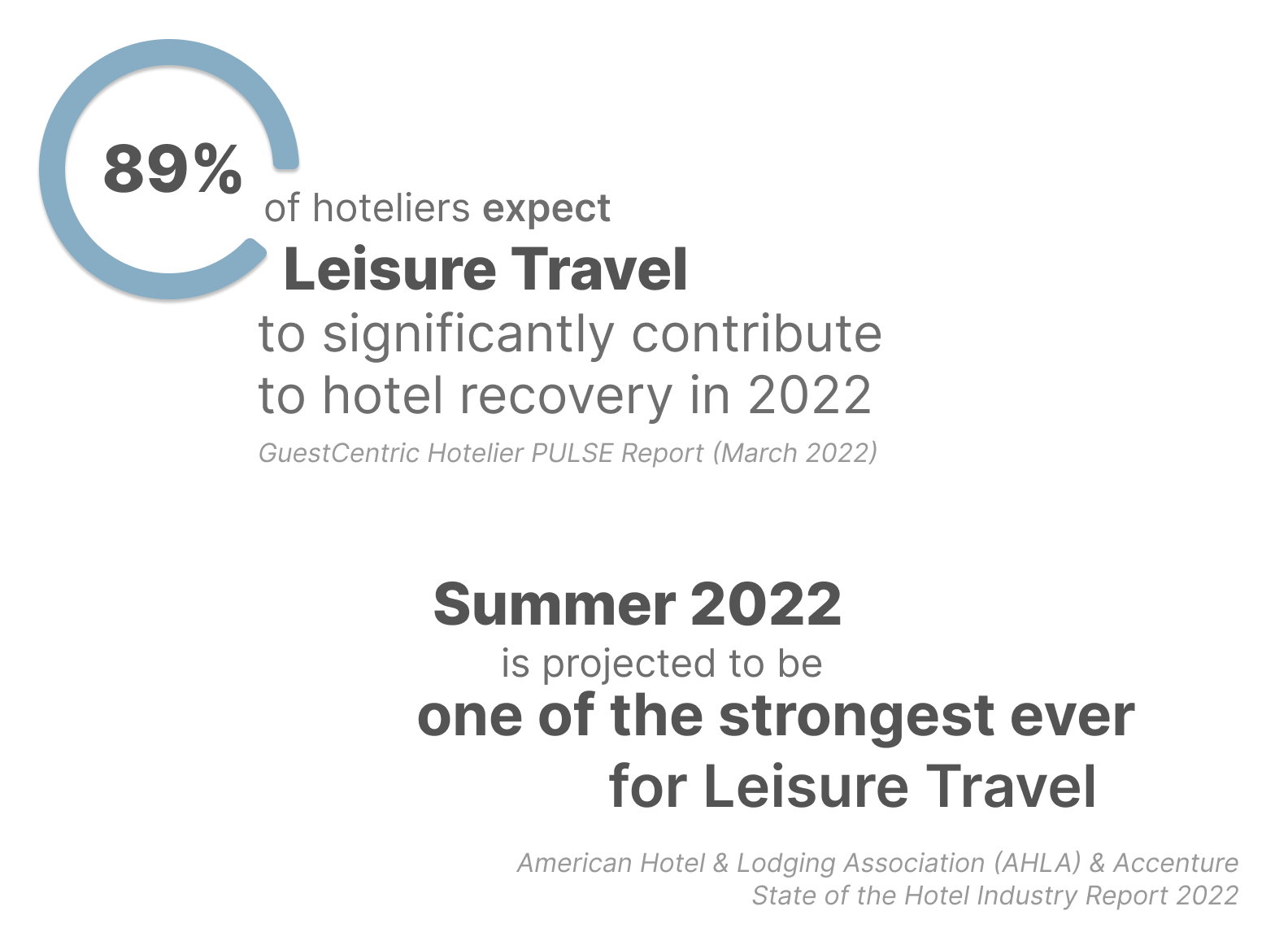 The target user is the Leisure Traveler 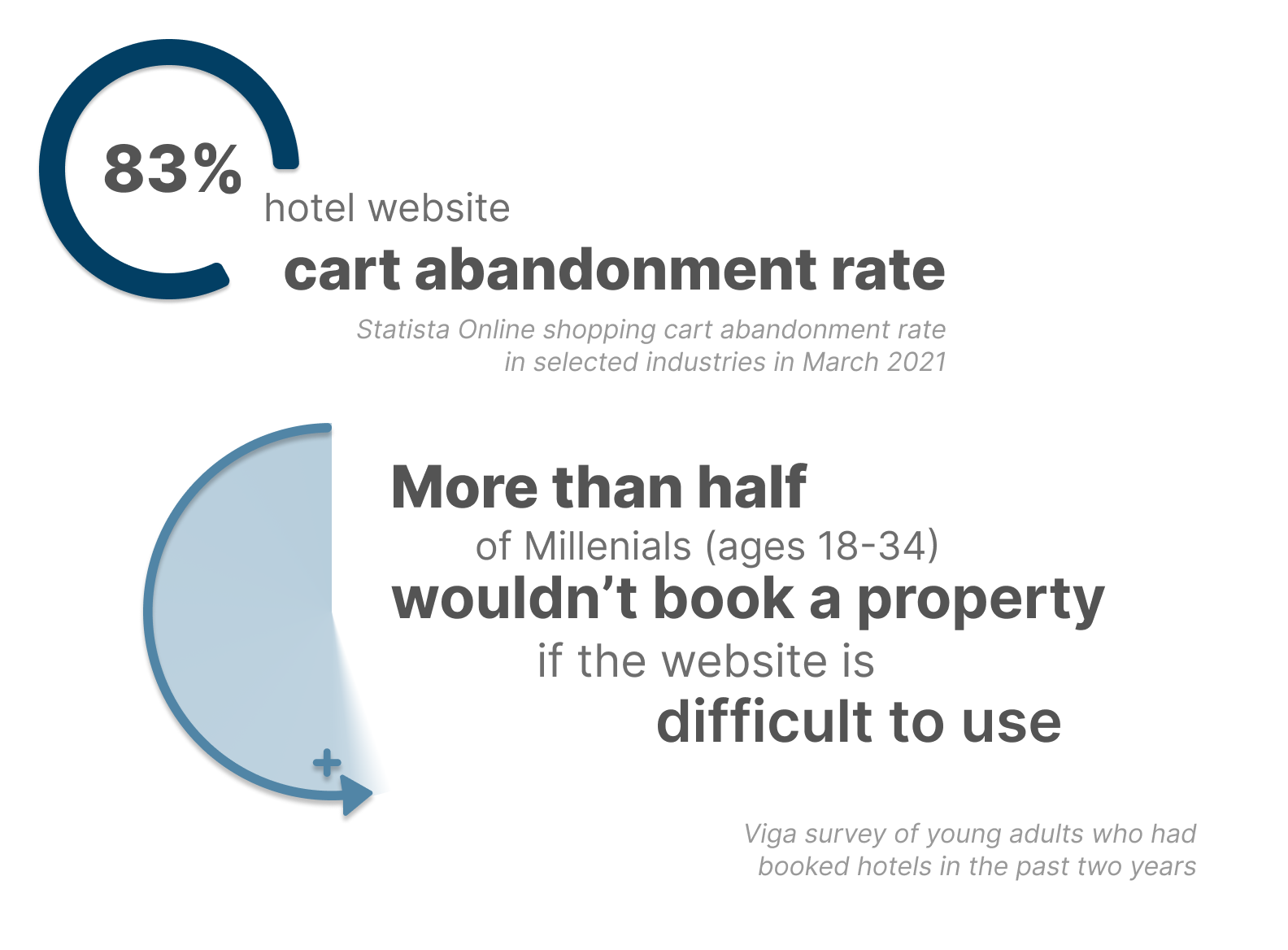 More than half of Millennials say they wouldn’t book a property if its website was difficult to use (Viga survey of 1,000 young adults aged 18-34 who had booked hotels in the past 2 years).

Although more users now research hotels on mobile, the vast majority (over 70% of U.S. users) still use a computer to do the actual booking. EyeforTravel, SaleCycle. 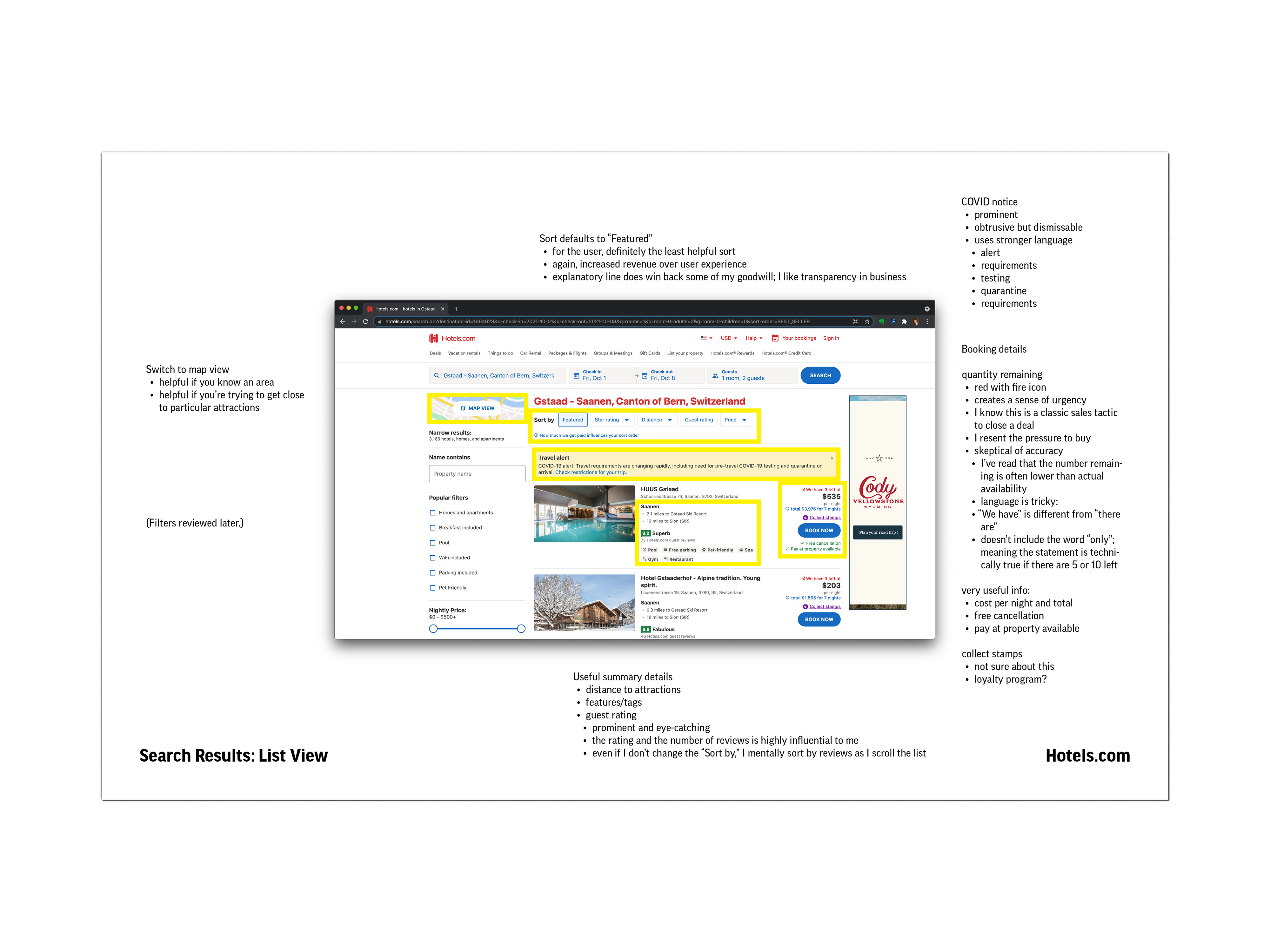 Notes on the Search Results (List View) from Hotels.com

To familiarize myself with conventions and design patterns in the industry, I began by visiting different types of hotel search and booking sites: aggregators, online travel agencies (OTAs), large hotel chains, and individual hotels.

From these, I selected four sites for an in-depth competitive benchmarking analysis: one OTA, two large chains, and one individual site. Because aggregators do not handle booking (they only collect search results), I opted not to include an aggregator in my benchmarking.

Welcome screen for my survey

I conducted an online survey to learn about people’s recent experiences using competitor sites, receiving 18 responses. The survey focused on four aspects of their experience:

The open-response questions (Goal and Change) provided the most interesting data. However, it's possible that the suggestion text for the Goal question biased the responses: 1/3 of respondents used the exact phrase that appeared as the first suggested response. Maybe it was just a really good suggestion...or maybe people don't like thinking too hard and tend to go with the first thing they see that sounds about right. With a much larger sample size, we could run an A/B set of surveys to see if different suggestion texts yielded different responses. That would be useful to know for future surveys, but wouldn't necessarily benefit this case study.

If I were to do it again, I would change the Goal question to be a checkbox answer question: multiple choice, choose all that apply. There are only a handful of primary use case goals, and I could include an "other" option for anyone with a fringe goal. It would require less effort from the respondent and it would be easier to tabulate the results.

Summary of survey results is included with my Customer Journey Map on Miro ("Data Sources" frame). 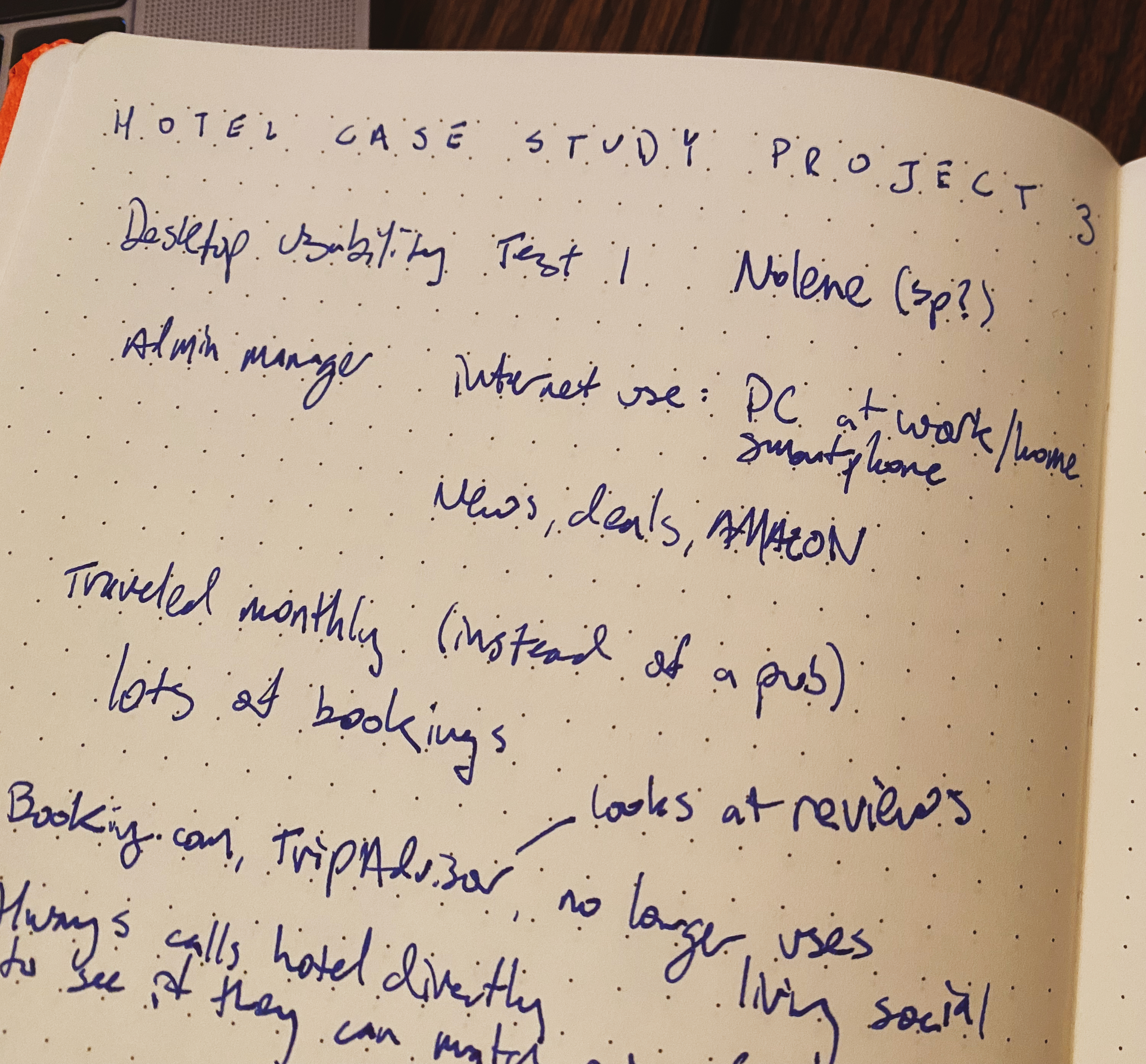 Notes from the interview with Nolene (Usability Test 1)

At the start of each Usability Test session, we interviewed users to learn more about their past experiences with online hotel booking. I interviewed one user, a colleague interviewed two others. Interview topics included:

Goals (focusing on their most recent online booking experience) 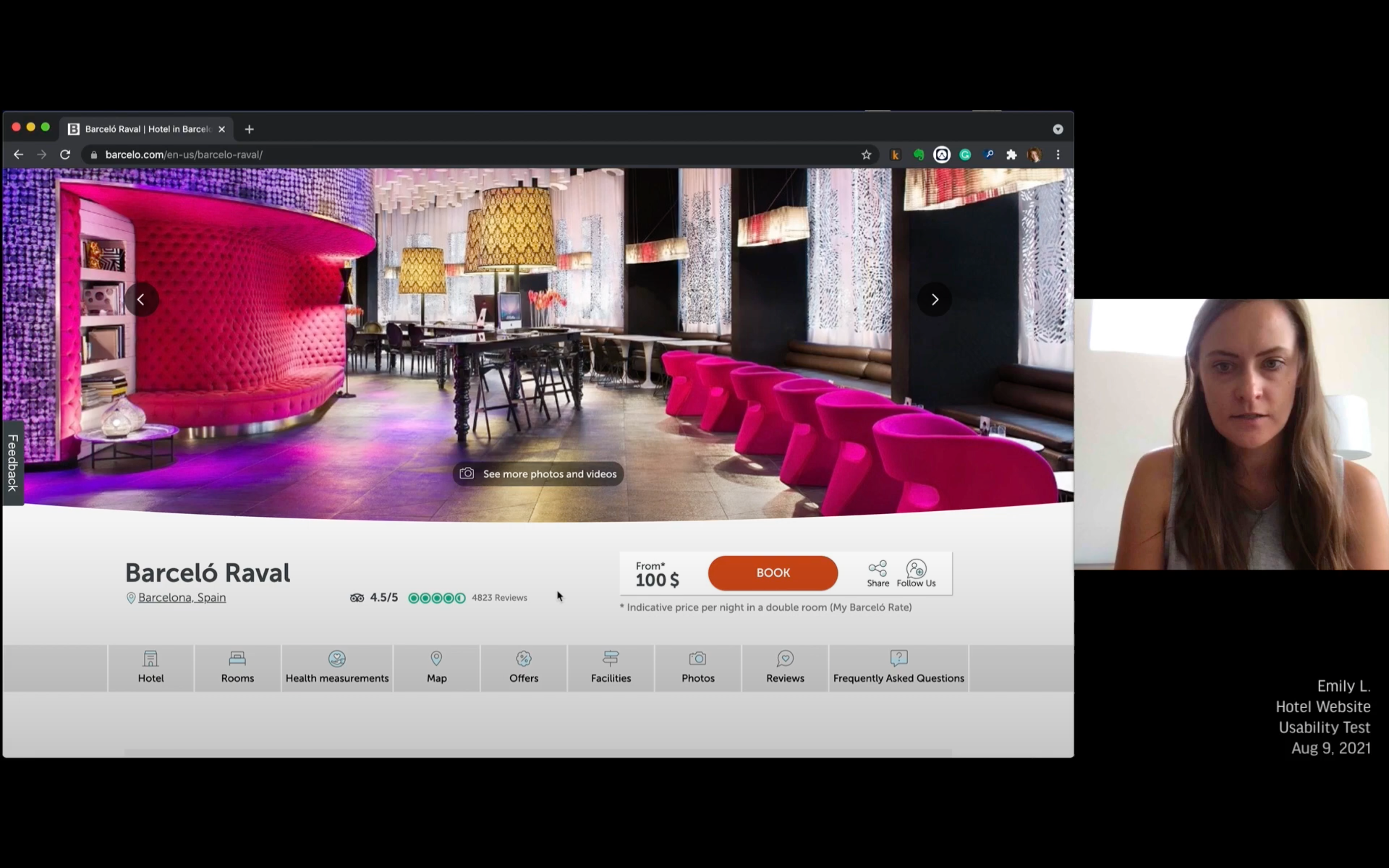 Screenshot from the session with Emily L. (Usability Test 3)

We conducted usability tests to gather qualitative observational data and real-time feedback about user experiences using two competitor sites. This was generative research conducted relatively early in the overall development process and might also be termed competitive usability evaluation. But the method itself was qualitative usability testing. I conducted one test, a colleague did two more.

These tests yielded lots of rich insights, including:

(Reflecting on the entire case study, not just this phase.)

I conducted this case study as part of my Professional Diploma in UX Design from the UX Design Institute. Along the way, I gained firsthand experience with the full UX process. I increased my proficiency with several tools, including Sketch, Adobe XD, and Miro. And I saw how my perceptions, personality, and creativity make me a great fit for the field of UX.

This project underscored a few key principles for me:

210+
Hours
10
Assignments
13
Different Apps
1
UX Diploma
Want to see more from this project?
Drop me a line and I can share anything not linked above.
Contact me