Hi, I'm Weronika!
UI/UX
Made with

Create your urban jungle
& never forget to water your plants

The Urban Jungle trend has been gaining in popularity recently. It's main idea is to place a piece of a jungle in your home. People living in cities miss the nature, but can they take care of it properly? I decided to ask how plant care looks like among friends. To the question "Have you ever neglected a plant?" 8 out of 10 people said yes. So how to make plant caring easier? How to help people have their own urban jungle?

As the main UX Designer I took part in all phases of the project. I started it from scratch and finished by delivering final UI design.

I used Double Diamond design model to keep a broad perspective in order to identify problems & user needs that would be channelled into a design-led product development process.

After the first round of research, I found that people tend to neglect plants for several reasons:

Plant lovers want to run an Urban Jungle, but it is difficult for them.The reasons why they tend to neglect plants are lack of knowledge or simply forgetting about taking care of them.

I conducted individual in-depth interviews and online surveys. Within this reaserch I found more pain points in plant care. My objective was to understand:

Initially, I assumed that the problem with running an urban jungle was due to negligence of plant, but during the research it turned out that the real causes were deeper. Their very beginnings are already at the stage of the idea of acquiring the plants. 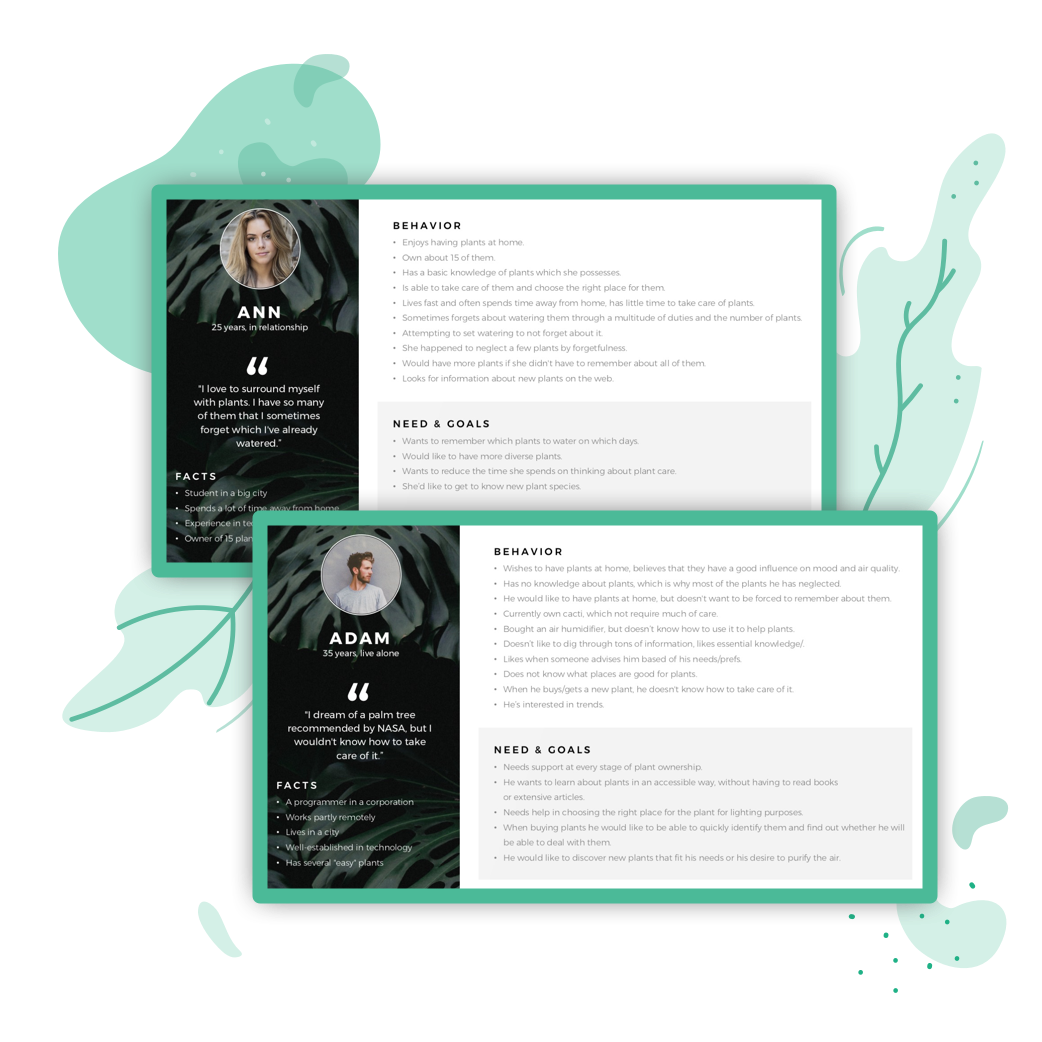 Based on the user reaserch I set up two personas to further focus on the needs of users. Each of them has unique needs & goals. I referred to them throughout the entire app development process.

Adam - is wannabe plant lover but needs a lot of guidance

Personas help me better understand the target audience and create the product that will refer to users needs. 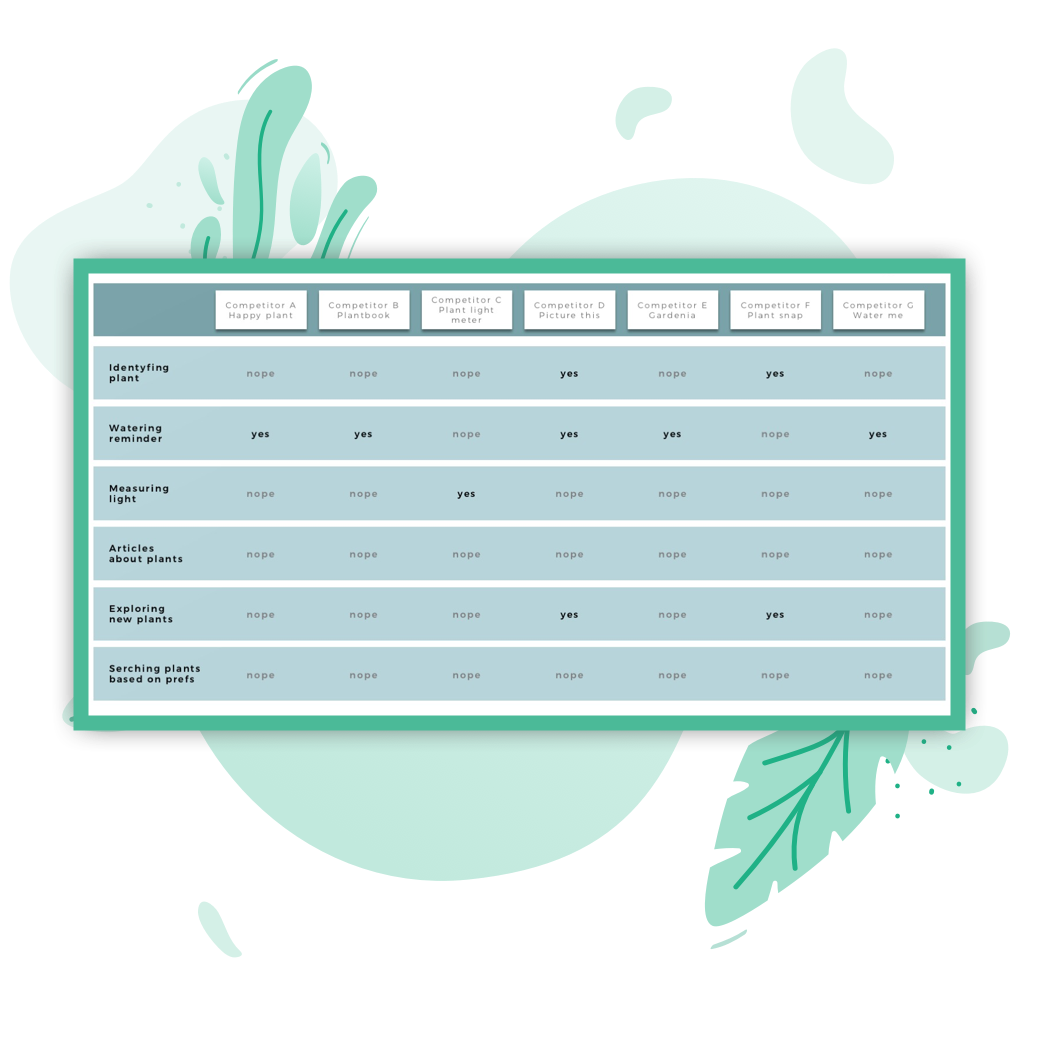 There are some similar applications on the market for improving the plant care process. However, they have different purposes and focus on a very narrow range of needs such as watering. I analyzed the competition to see if other apps on the market respond to personas needs.

The analysis clearly shows that despite the high availability of different apps, none of them solves all problems and needs. Usually apps respond to only one need. There is no comprehensive solution. 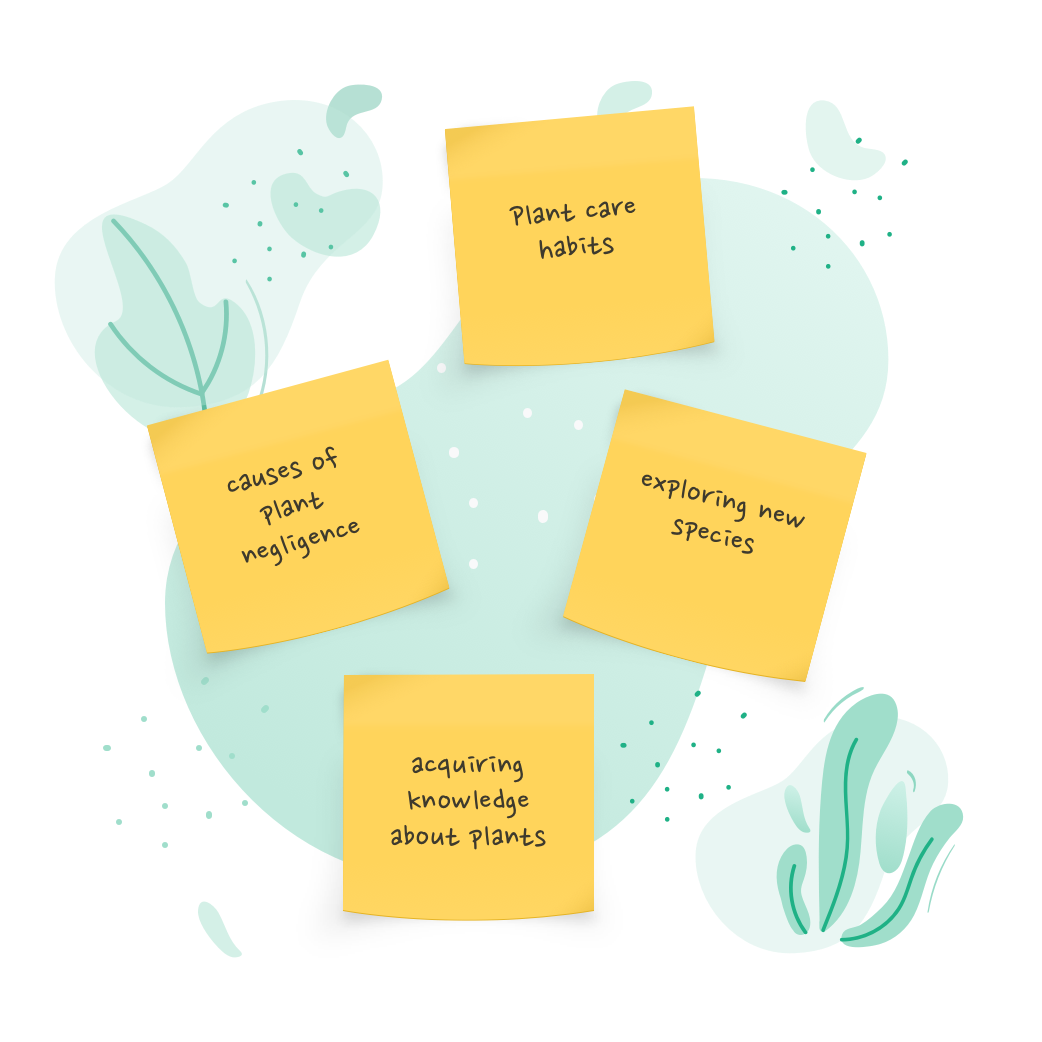 I used card sorting to organize insights from interviews. This is the starting point for creating an information architecture and for inventing the functionalities of the application.

I found that the app needs to cater to difrent user types interested in different tasks such as:

Through user research, I identified users problems and needs. I used Red Routes to prioritize user needs, build and optimize product features that provide the highest value to customers.

In order to create an application that responds to the users needs it was necessary to consider how to solve the problems they encounter. I used the HMW method as a starting point for inventing functionality. 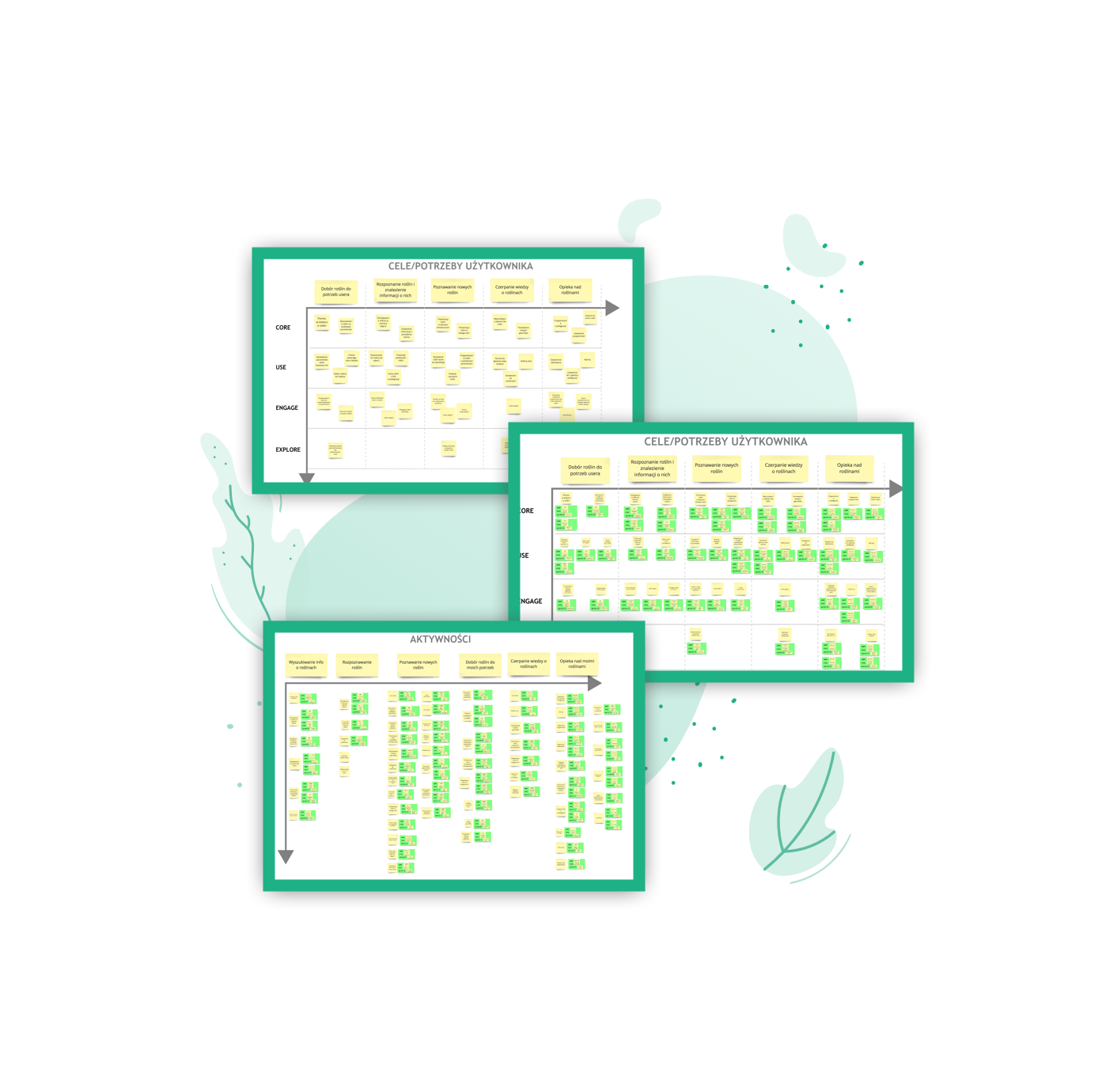 In order to maximize usability for a user, I expanded user activities to user stories and mapped them into simplified flows.

In order to get to know user's behaviour better before using Jungle app, I created a Customer Journey Map for each of personas. From this exploration I found: 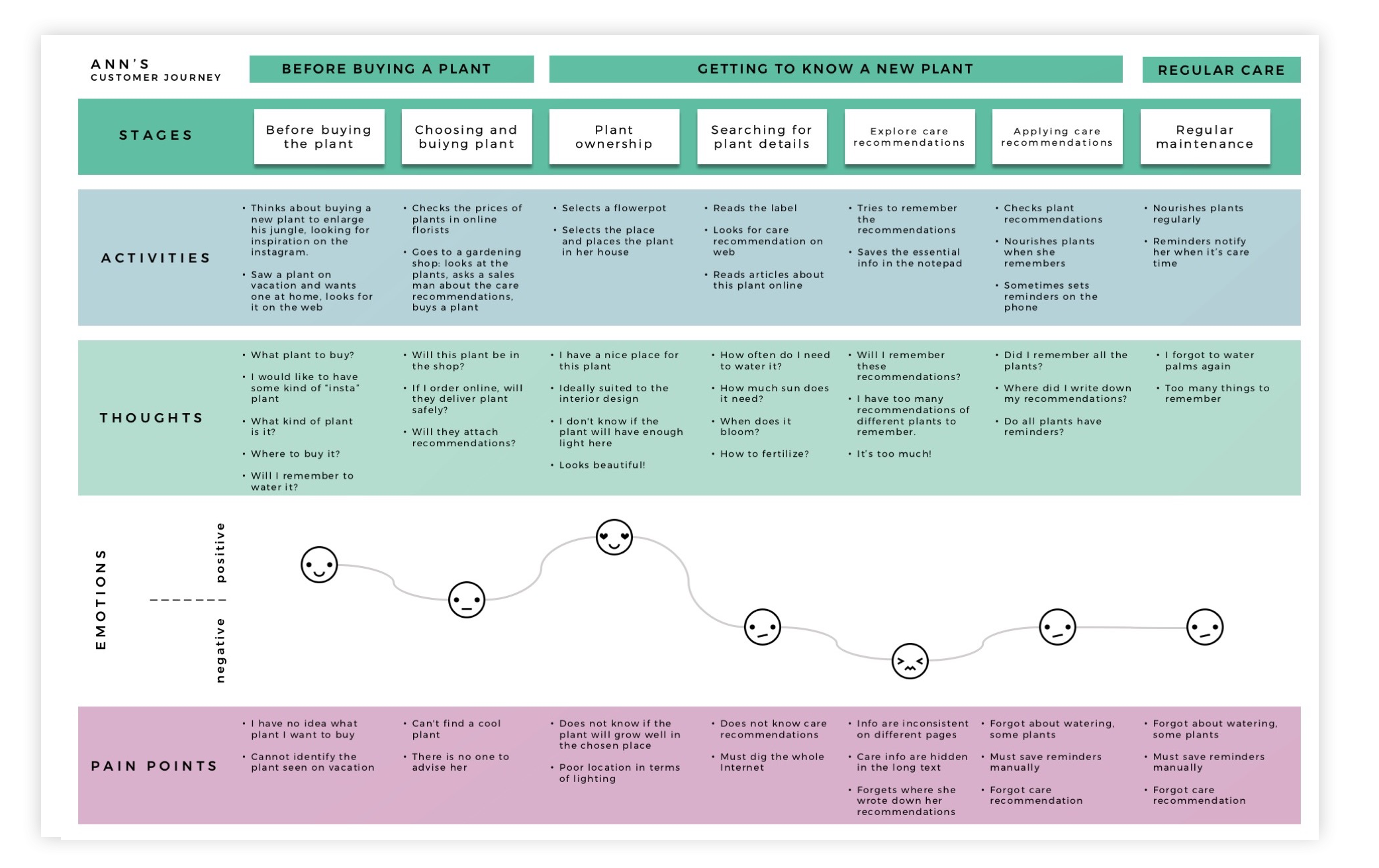 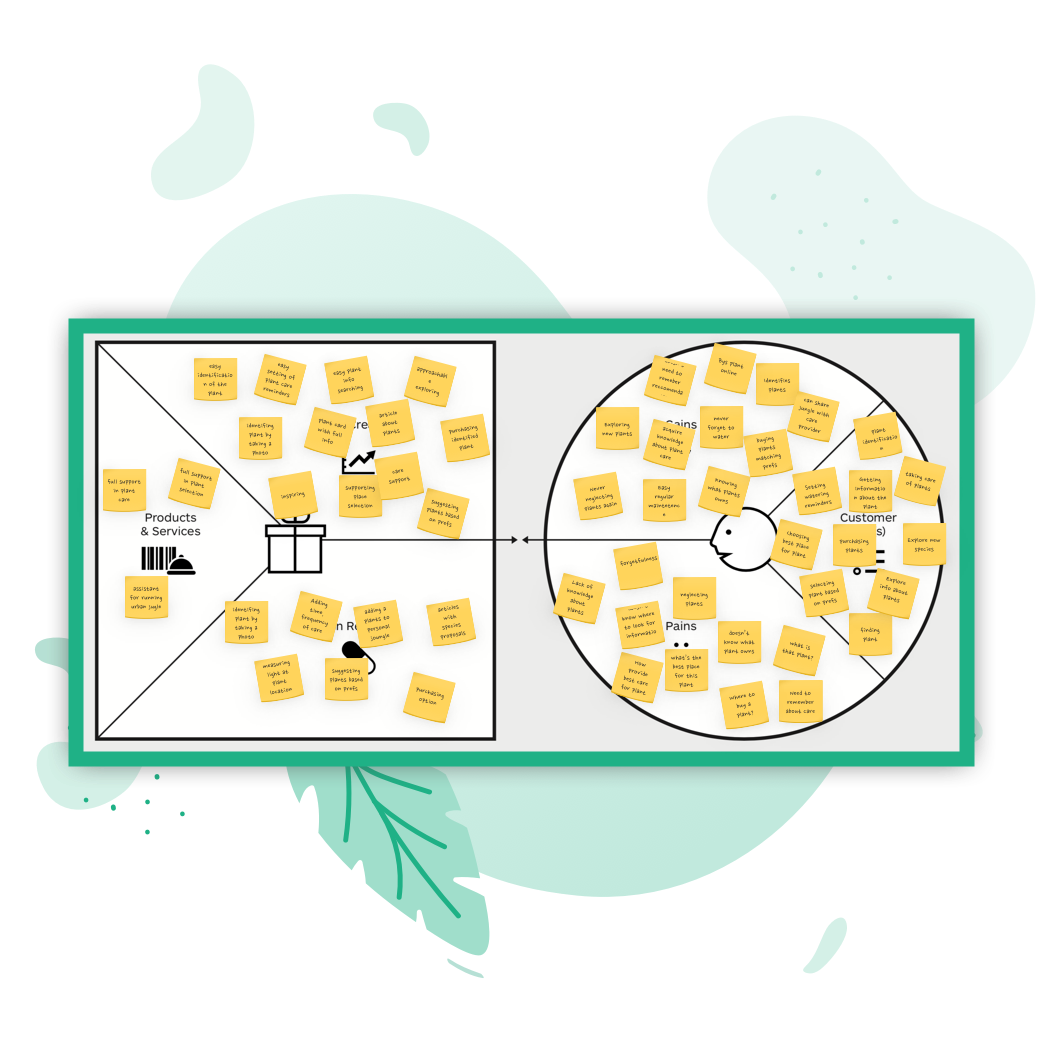 Through creating Value Proposition Canvas, "jobs to be done" were uncovered. Analizing this helped to generate the functionality, which eliminated the main users' problems and adressed to their needs.

User research and persona creation brought up the users main needs, goals, and behaviours. Therefore, I found that the main issues my design decisions needed to solve were:

This user journey map illustrates the experience of using the Jungle app during the same process as Customer Journey. User journey identifies key opportunity areas. In order to create a positive experience for users, it was important to address and minimize the things that cause the negative emotions in Customer Journey and Value Proposition Canvas.

I created an application map toghether with information architecture. They both reflect the future state of User Journey. They are also going to fulfil users' needs and make the process enjoyable. 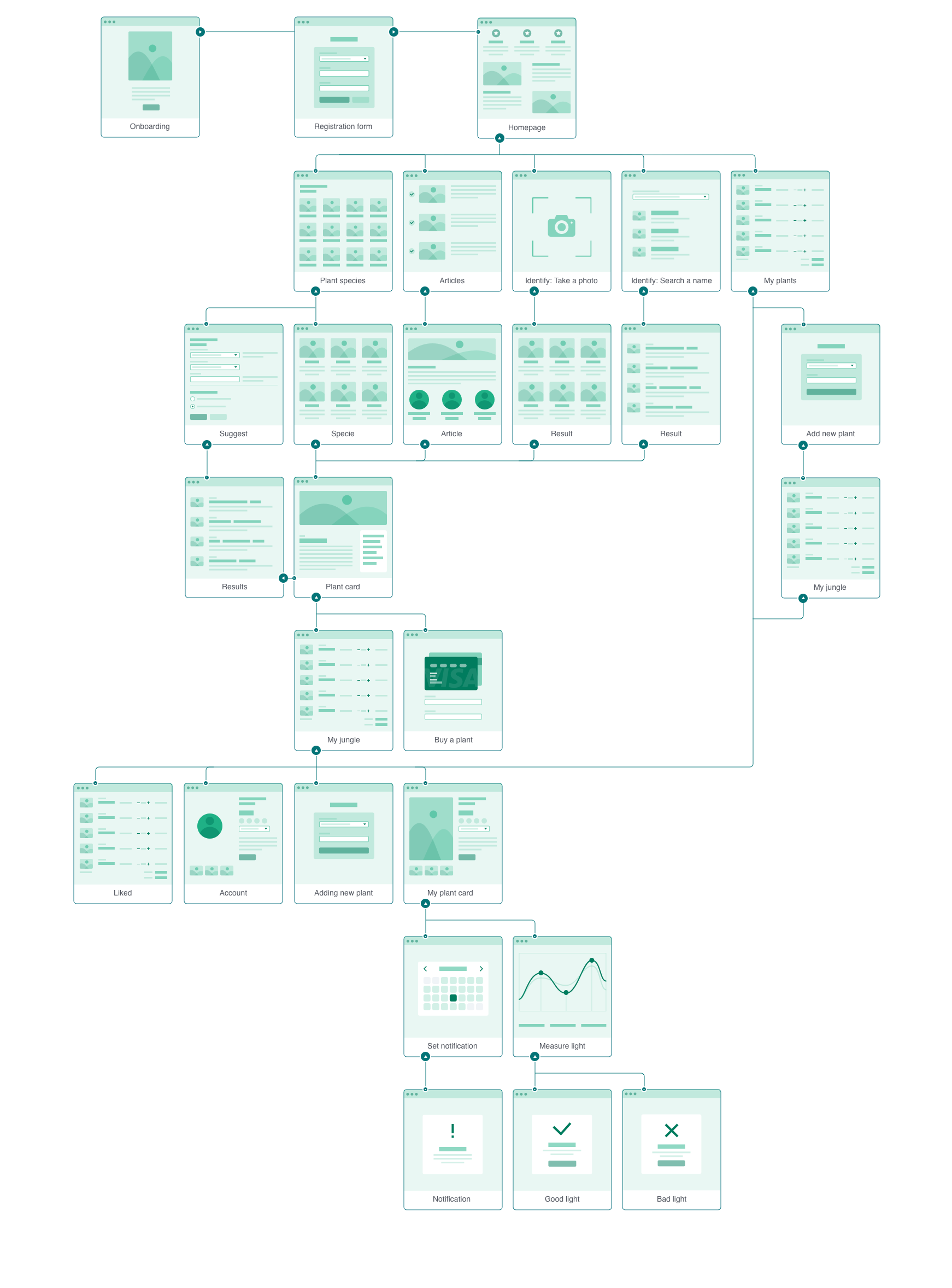 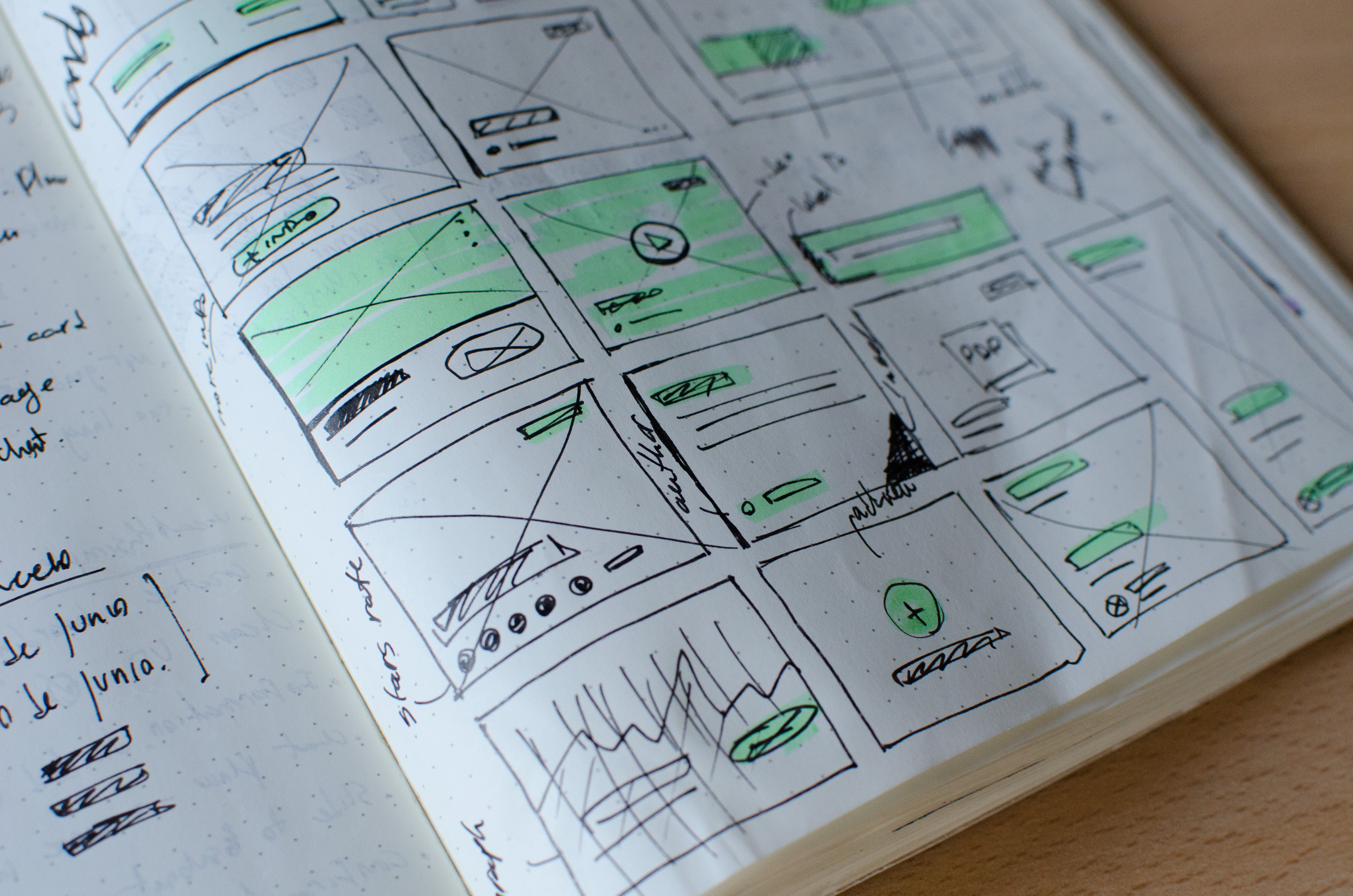 I started the design process with sketching it on paper. I do that because It helps me quickly iterate through many design ideas.

I created few versions of sketches, where the users' problems were solved in a different way. I chose the option which was best suited to the steps in the process from identifying a new plant to taking care of that plant at home.

In the next stage I made a low fidelity protype in Axure to start usability tests.

Using the functional Axure prototype of Jungle app I created scenarios for testing.The tasks in the research scenario covered the areas of main issues on the paths of the users' needs and goals.

The goal was to verify the understanding of the concept of home plant management application and its usability.

1. Problem Identifying the plant - On the result screen the name "Similar plants" suggests that the right plan was not been found. You get the impression that the displayed results are plants that are visually close to the plant you are looking for.

2. Problem Finding recommendations - On plant card screen the watering info does not indicate how often a plant should be watered. "It would be good to have the default setting".

Solution Add information on how often the plant should be watered. When setting the watering notification, the recommended frequency will be visible as the default setting.

3. Problem Watering plants - "I don't have the option of marking the plant I've already watered". On My Jungle screen users felt the need to mark as "done" the watering of the plant, which would give them the impression of fulfilling their duty.

Solution Add the option "done" for each plant requiring watering. The next watering will be counted from the moment the plant is marked as watered. This will prevent the plant from being overwatered when watering again.

4. Problem Home screen - The biggest challenge was the menu structure of the mobile app. App had tiles in the upper part of the screen for explornig new plants and identifying them and a bottom navigation which relied more on the app's functionality.

Solution In the end, I went with the bottom navigation because users were more familiar with that type of naviagtion and they found it faster.

After the first round of tests, I collected knowledge from the study and sorted it using card sorting. The results of the study influenced the decision to redesign the main navigation. 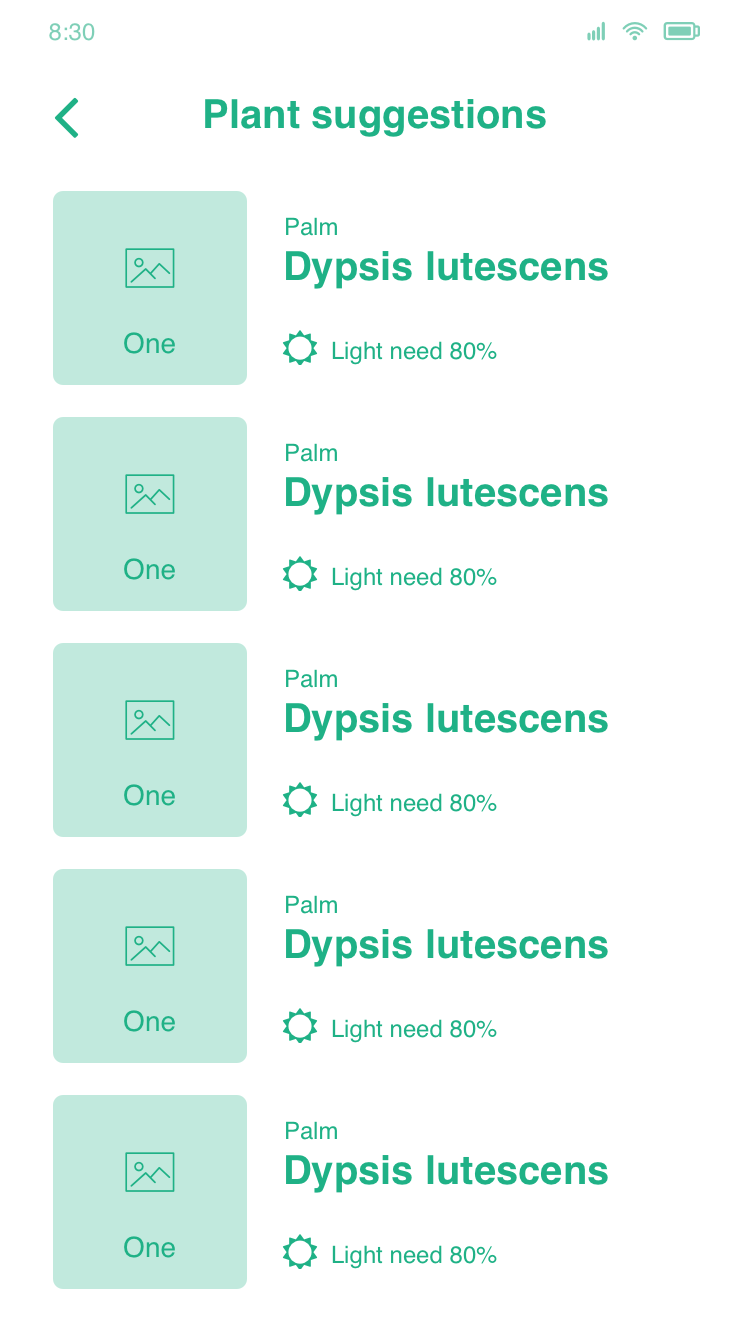 Change in the initial navigation affected the user flow which also required reconstruction. Below are the user flows after modification. 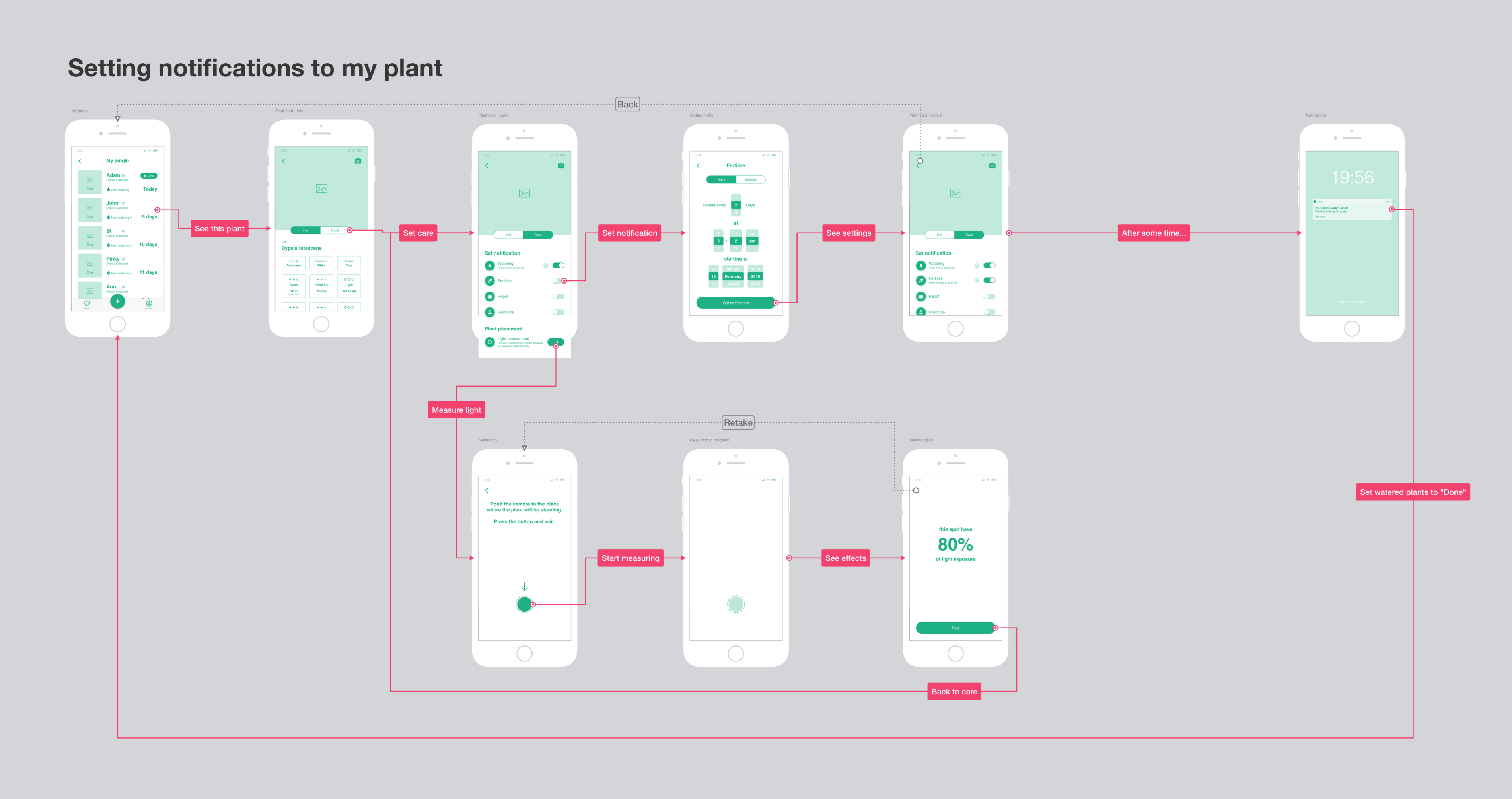 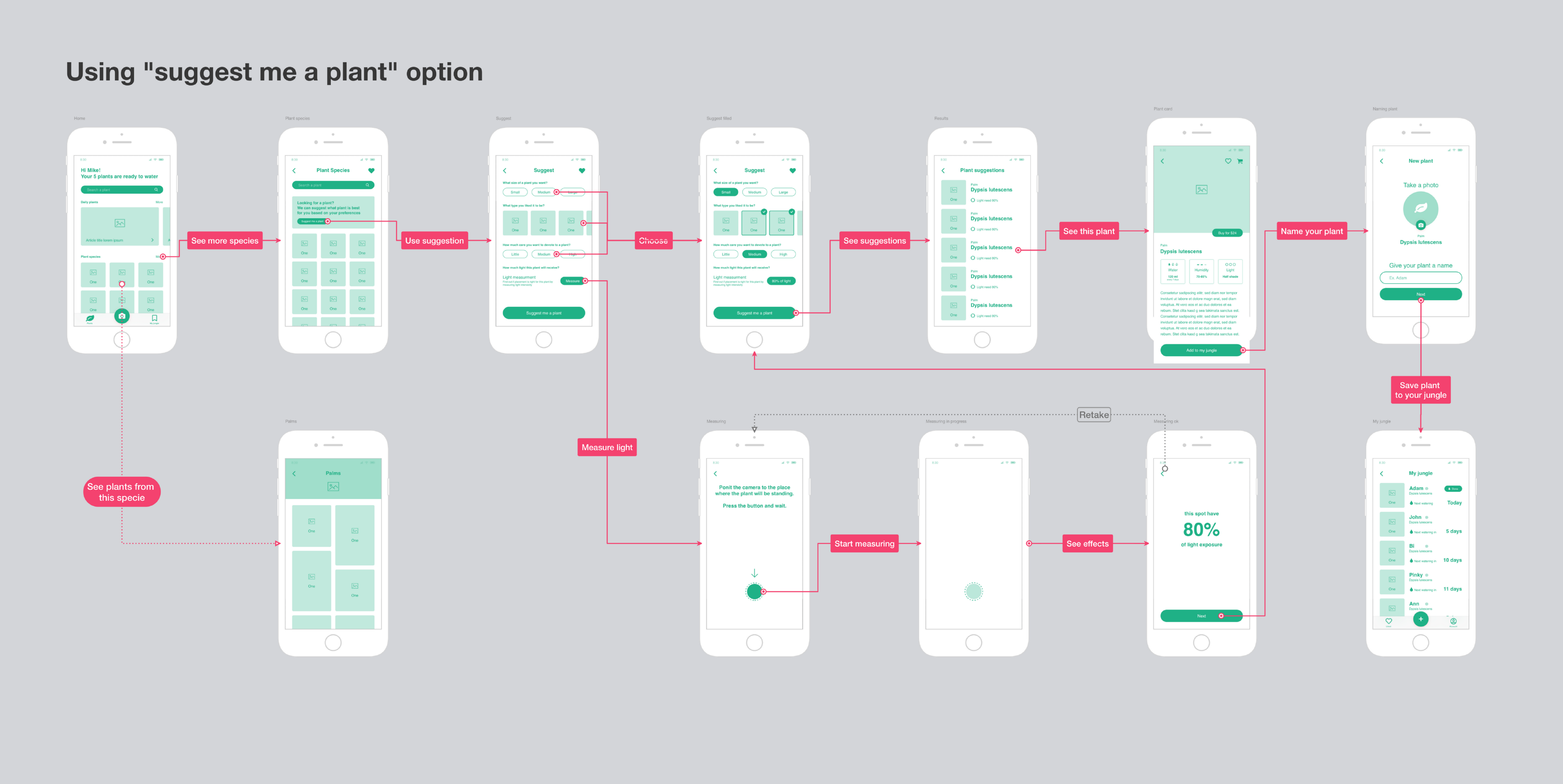 Navigation redesign influenced not only the user flow but also the appearance of individual screens. Based on new user flow I redesigned wireframes and changed them into a prototype ready for second round of testing.

To validate redesigned solutions I had to test my prototype on 5 additional persons. During testing I discovered that redesigns had solved previous issues and were performing as intended. 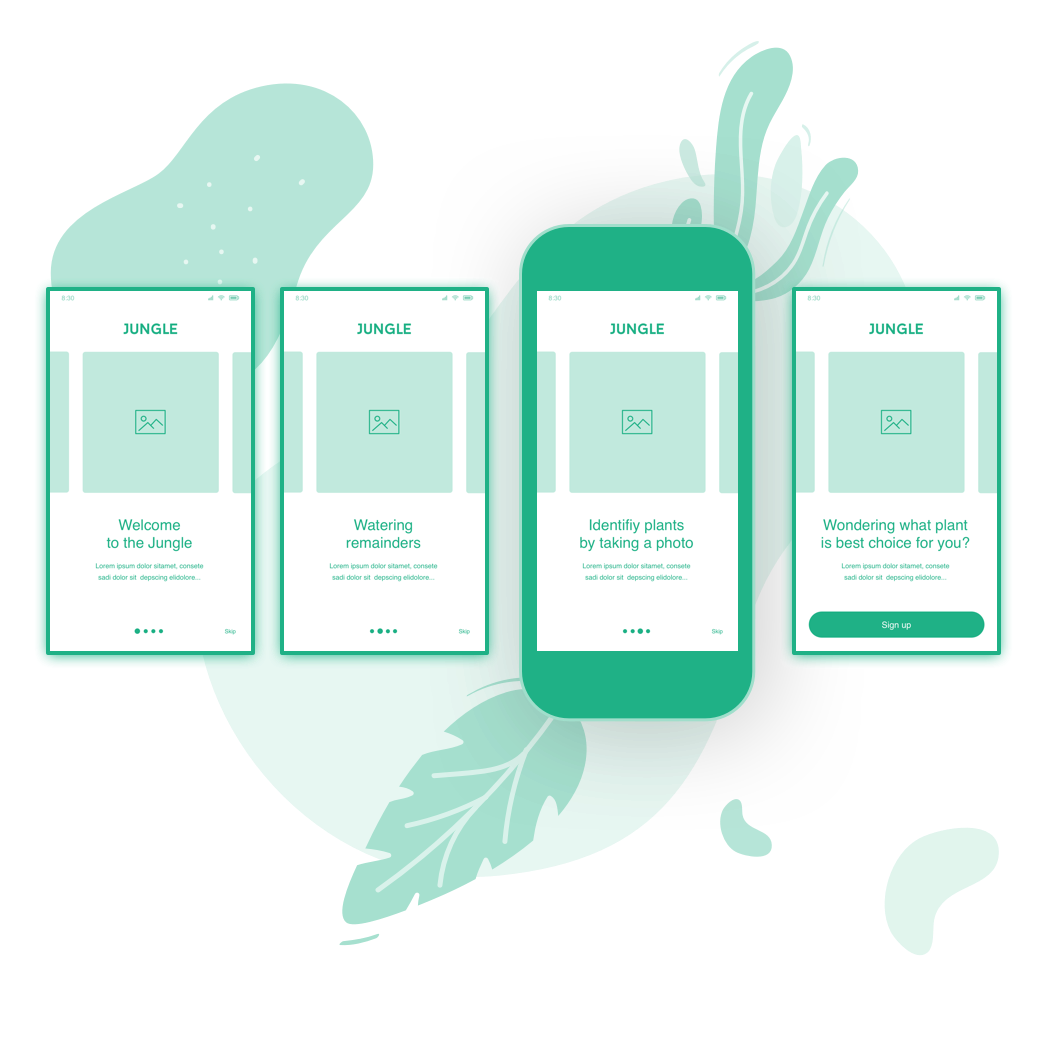 Onboarding is one of the most critical phases in an app user’s journey. With this process app is more benefit-oriented: 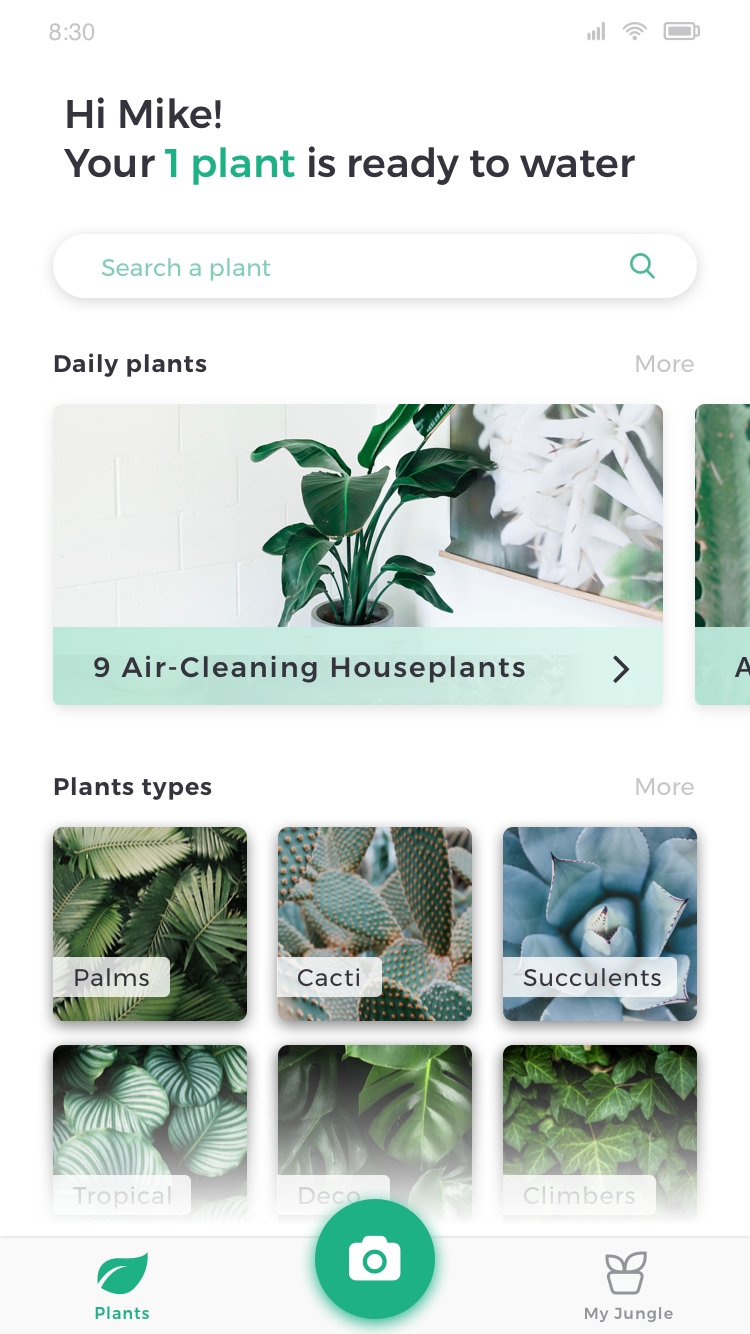 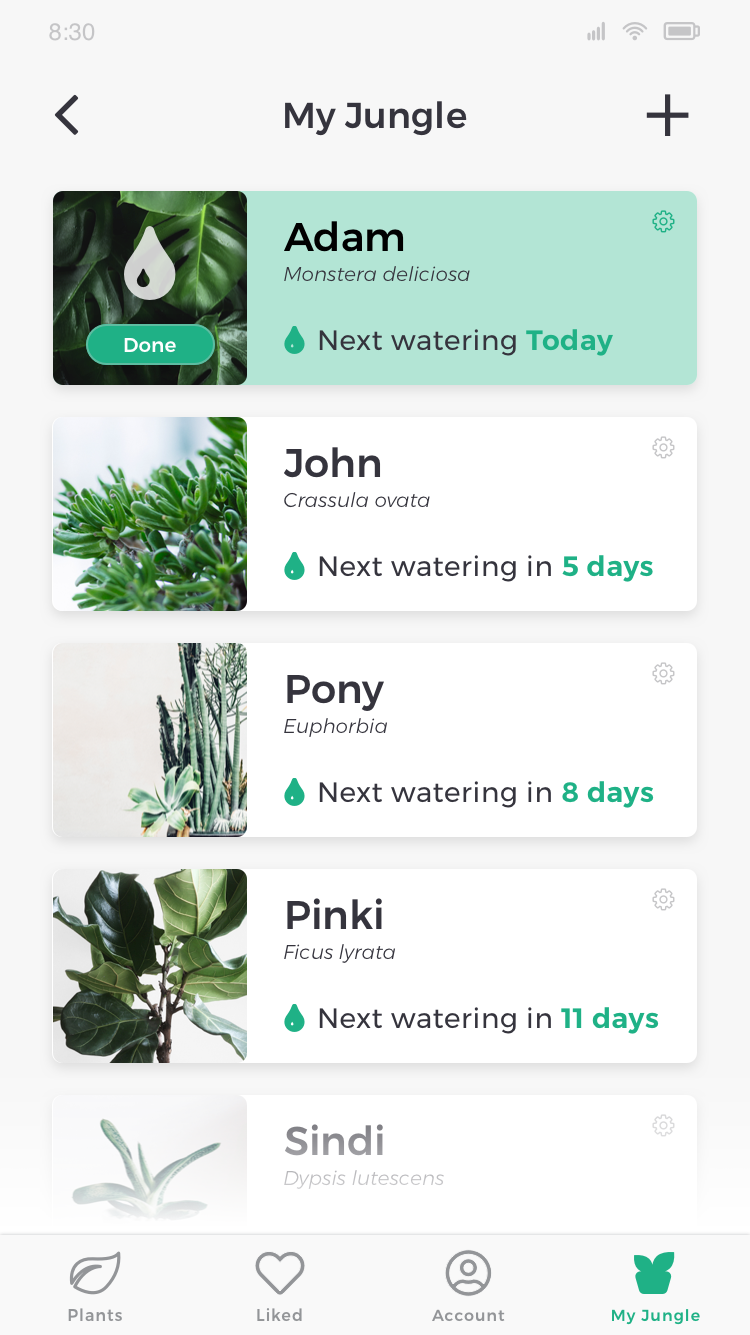 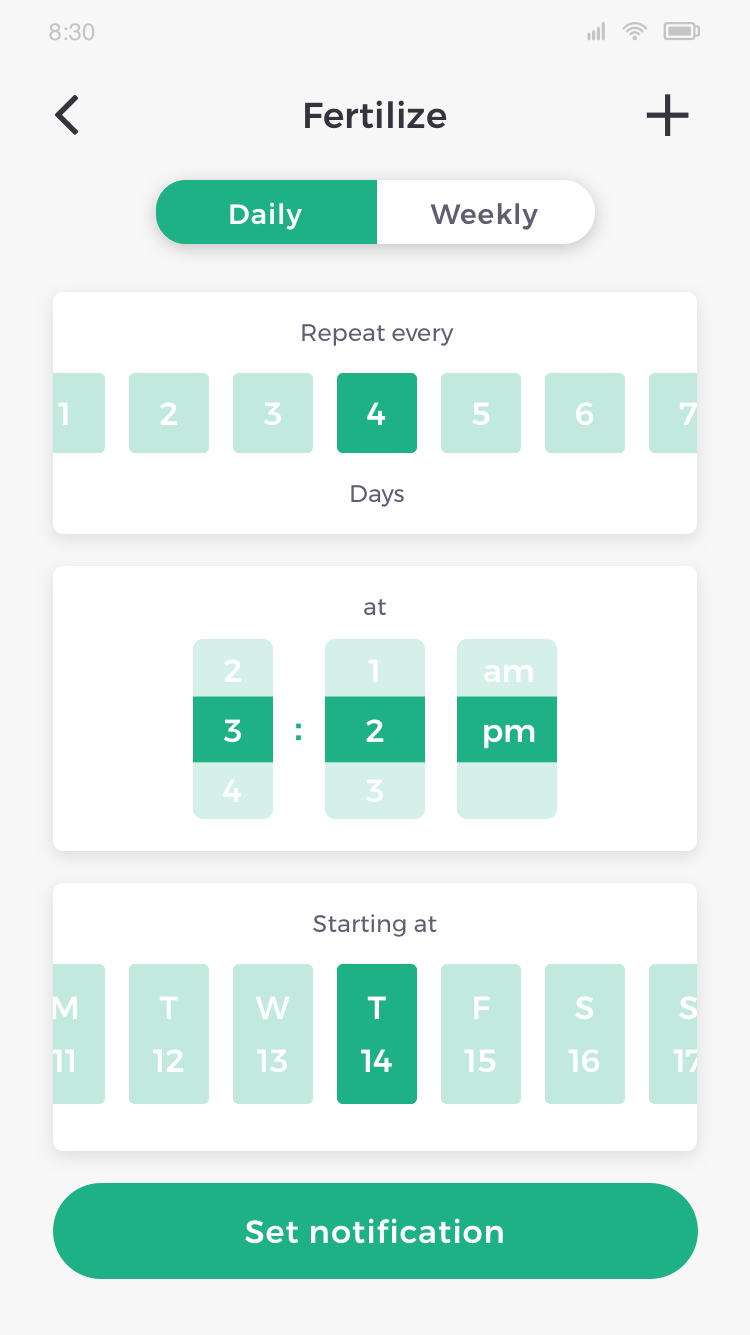 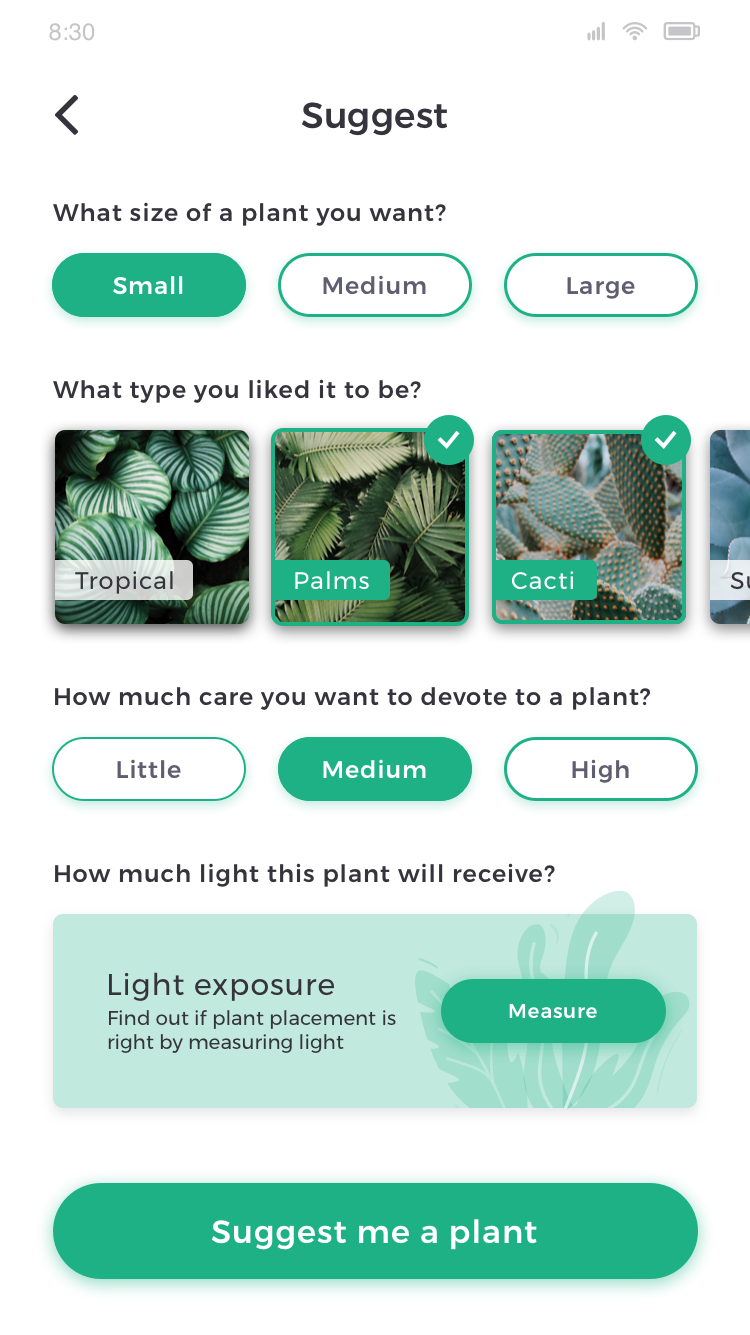