The idea was to simply manage your rental property and increase booking by responding to the inquiries as fast as possible.

I tested the user journey with potential user to understand their needs to determine if the features we were adding were correct. The potential user were recruited contacting owners through the app delivery channels (Air BNB, VRBO).

The users were asked after a reservation what was their next task? How long does it typically take for them to complete a booking and send a contract from time receipt? 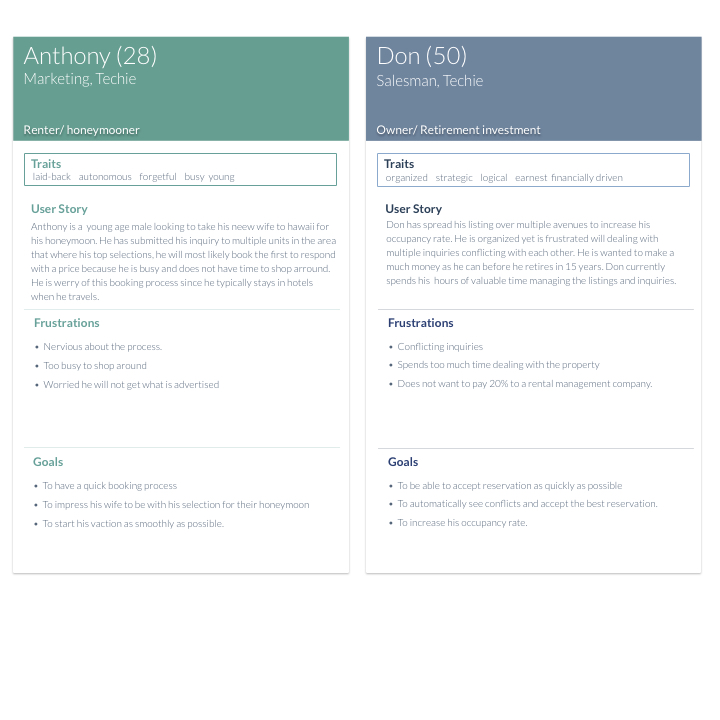 Based on the interviews we set up a two personas, one for single unit owners and another representing the renter. We referred to this throughout the product development process.

We initially started with a single persona of a single unit owner. This eventually developed into including the renter since most owner were concerned with how their  renter were treated.

Each persona contained a Demographic to the average owner / renter, problems, motivations to use the app for the owners, and motivation to come back for renter.

The personas affected the way we handled each aspect of the product design. We included multi-tasking for the owners, and a chat/call feature for the owners and renters.  Then each step was thought through to make it as easy and as quick as possible for the owner to secure a booking.  Finally at the end of the process we wanted to make sure the renter recieved a nice and easy package to complete the booking and enjoy their vacation. If the renter was happy with the process they were 85% more likely to become returning renters. 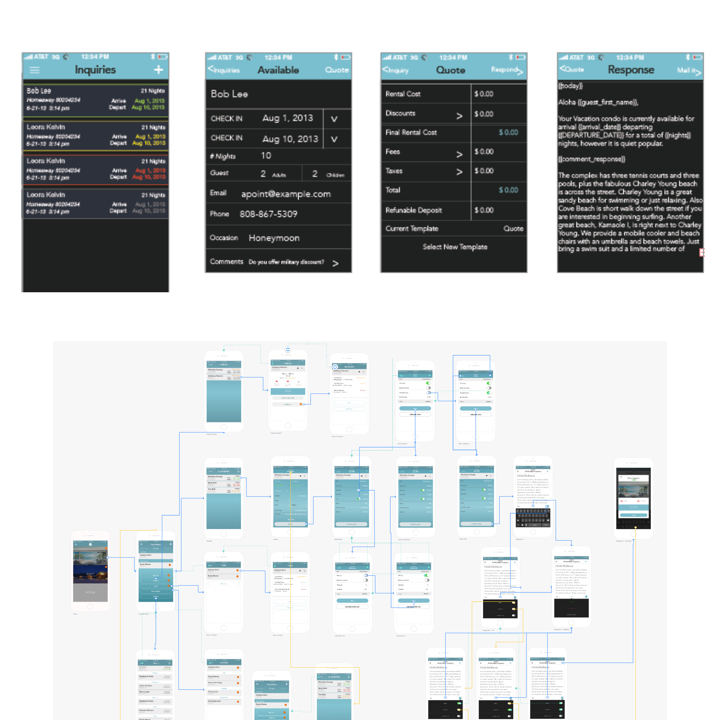 In the early stages of my process I create rough prototypes with wireframes to flush out ideas and the intuitive tract for the app to take.

This helps me get as many ideas as I can onto paper and then determine which route is the best to take.  I then take these rough sketches and create a low fidelity wireframe using balsamic or moquups. I will then pair this with a flow diagram to start the process of working the flow or the app. This allows me to make sure I have not forgotten a path and helps discover new paths for the user.

These low fidelity prototypes are used to internal testing with the team. I  then create a color palette to work from and start creating components and symbols to use in my high fidelity mockup by using Sketch app. The high fidelity will then be used for user testing with potential clients.

My process: Before releasing the product to the development team, I do an initial test with the developer to understand if they see any feasibility issues. I will also select a few key stakeholders to test the prototype by asking them to complete a list of tasks associated with the  feature creating.

During the VR Wizard testing:

I tested users who had not seen the product before to complete a booking and send a contract.  I timed these interactions as well to notice any usability issues.  User testing is done with the team and lead developer as features were ready.  Full usage testing was done remotely with the initial journey map recruited users once a full tasks was completed in high fidelity. Once the full final application was done in high fidelity I returned to a few of the initial recruits, in person, to moderate and test the usability of the full application, in-order to catch any usability issues so we may correct the issues while the application is still in development. (When testing the public I always use high-fidelity prototypes, I have found they want to be able to be immersed into the app, by doing this it gives us honest feedback and helps to identify usability issues and not just opinions.)

From these test I discovered that the user would like to be able to manage revenue information for tax purposes which became a feature in the second phase.

I discover the the user need to be able to increase the type size of the field. Which was implemented as a feature within settings.

The users was very pleased with the speed with which they could complete a booking and send a contract.

The gradient was adjusted to be darker to increase for legibility. In certain areas the user had a hard time reading the white type. 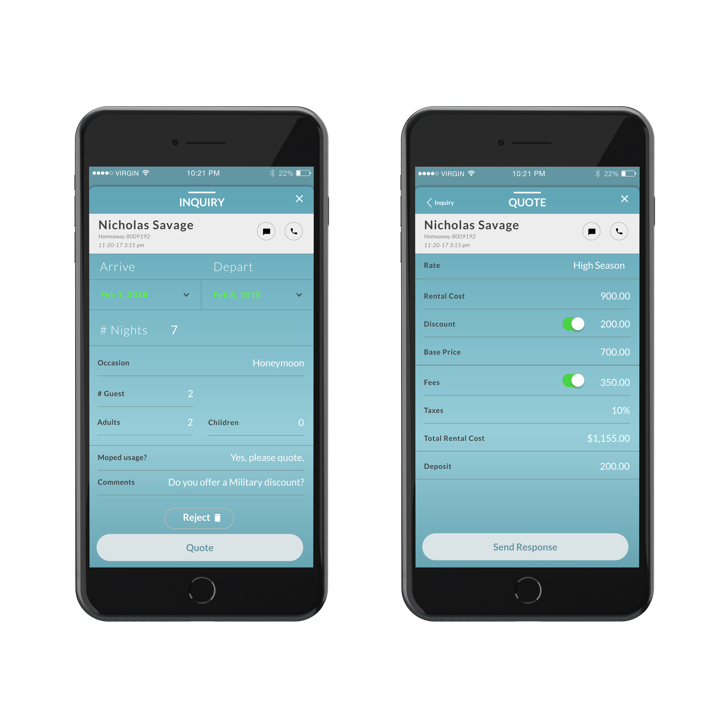 After testing the high fidelity prototype I finalized the design by correcting issue discovered and prepped a final design file for handoff.

The UI was based on a fresh and clean look while following a material design guideline. Inspirtation for this look was the PayPal app and the multi-tasking in the apple mail app.

"Preston was great to work with during the VR project, we loved his ability to think strategically through the process and empathize with us users."