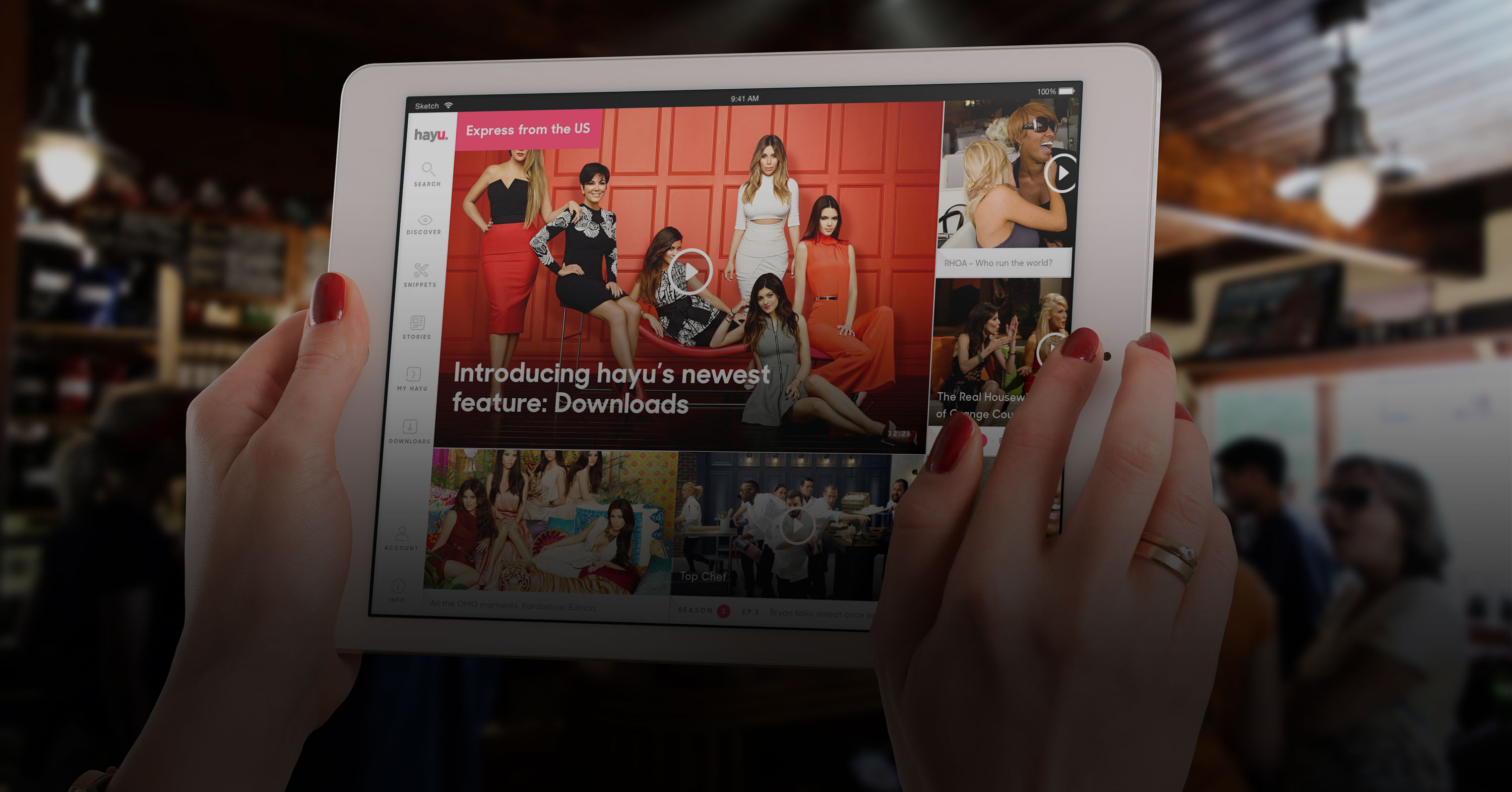 Designing Downloads for an SVOD service to capture more customers 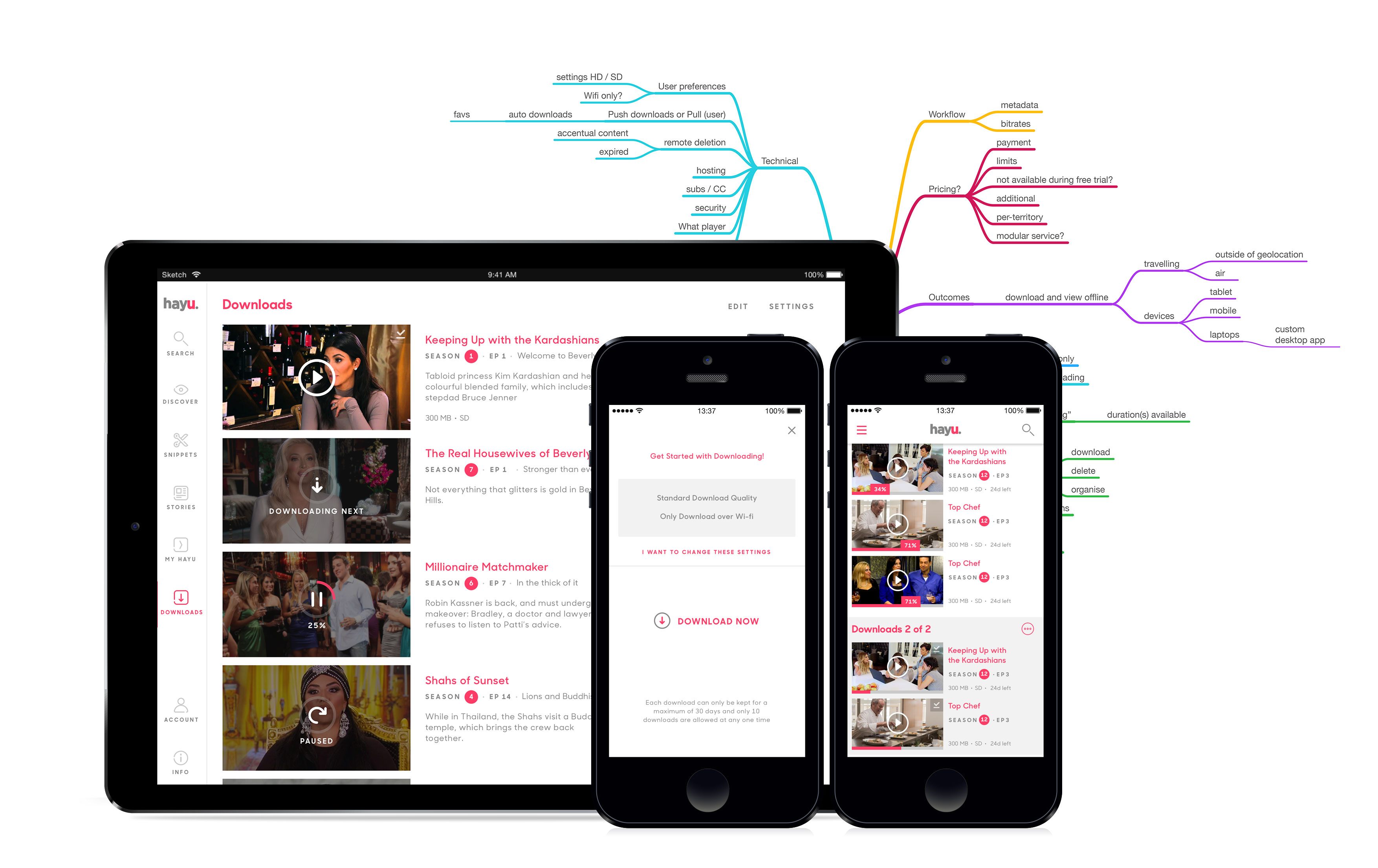 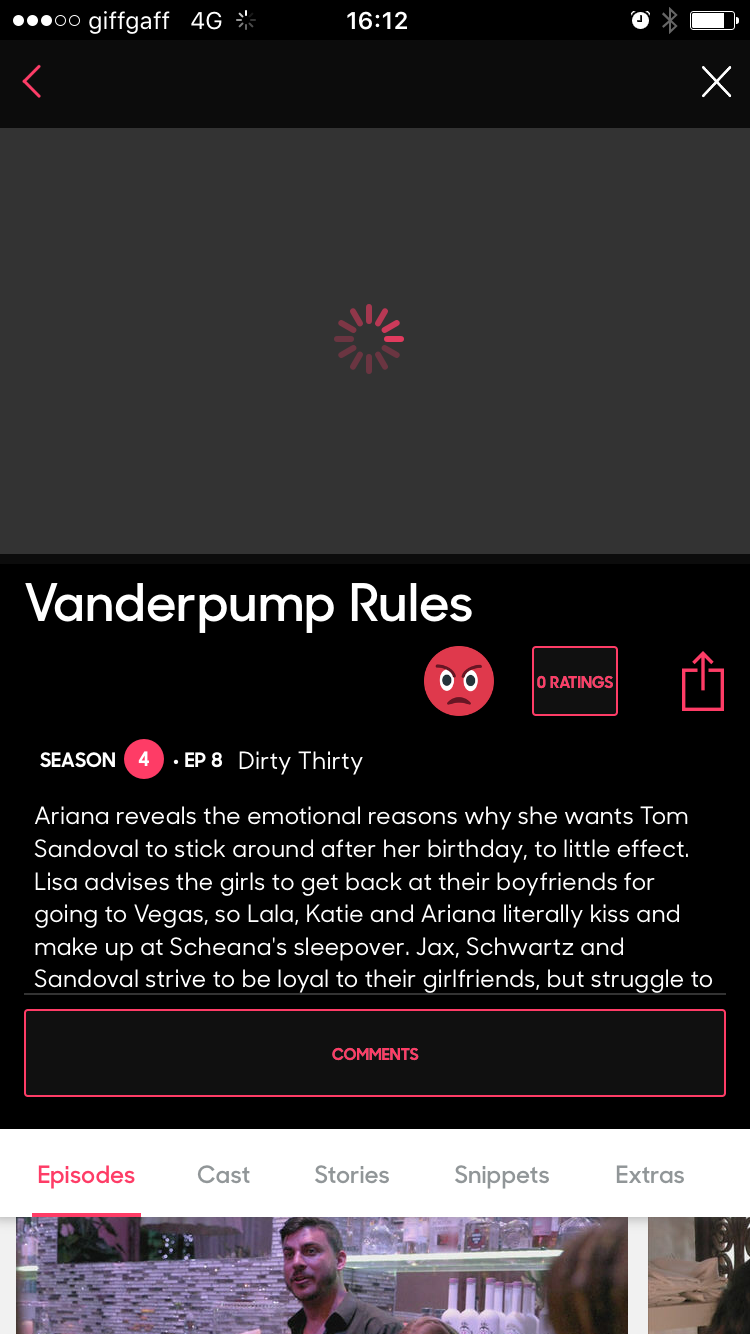 Hayu is NBCUniversal's first consumer SVOD platform across the web, apps and TV, launching in March 2016. However, technical issues meant the video stream frequently stalled, interrupting customer viewing experiences. Customers wanted to download complete episodes to avoid these issues and also made it clear they wanted to watch offline.

Once it was clear to the business that a Download feature was required, I became responsible for defining the UX for the feature across the relevant platforms and working closely with all members of the Product team.

The Downloads feature was scoped out with team discovery workshops, brainstorms and desk research. Competitors were analysed and a plan with an initial specification was formed. Four personas from prior development of the service were referenced.

Usability studies to discover download behaviour and prioritise features were also considered but not conducted due to time pressure and utilising an existing Downloads approach to be provided by the technical partner.

Wireflows were created to highlight the affected areas of the existing apps and were then adapted to incorporate the new Downloads feature. 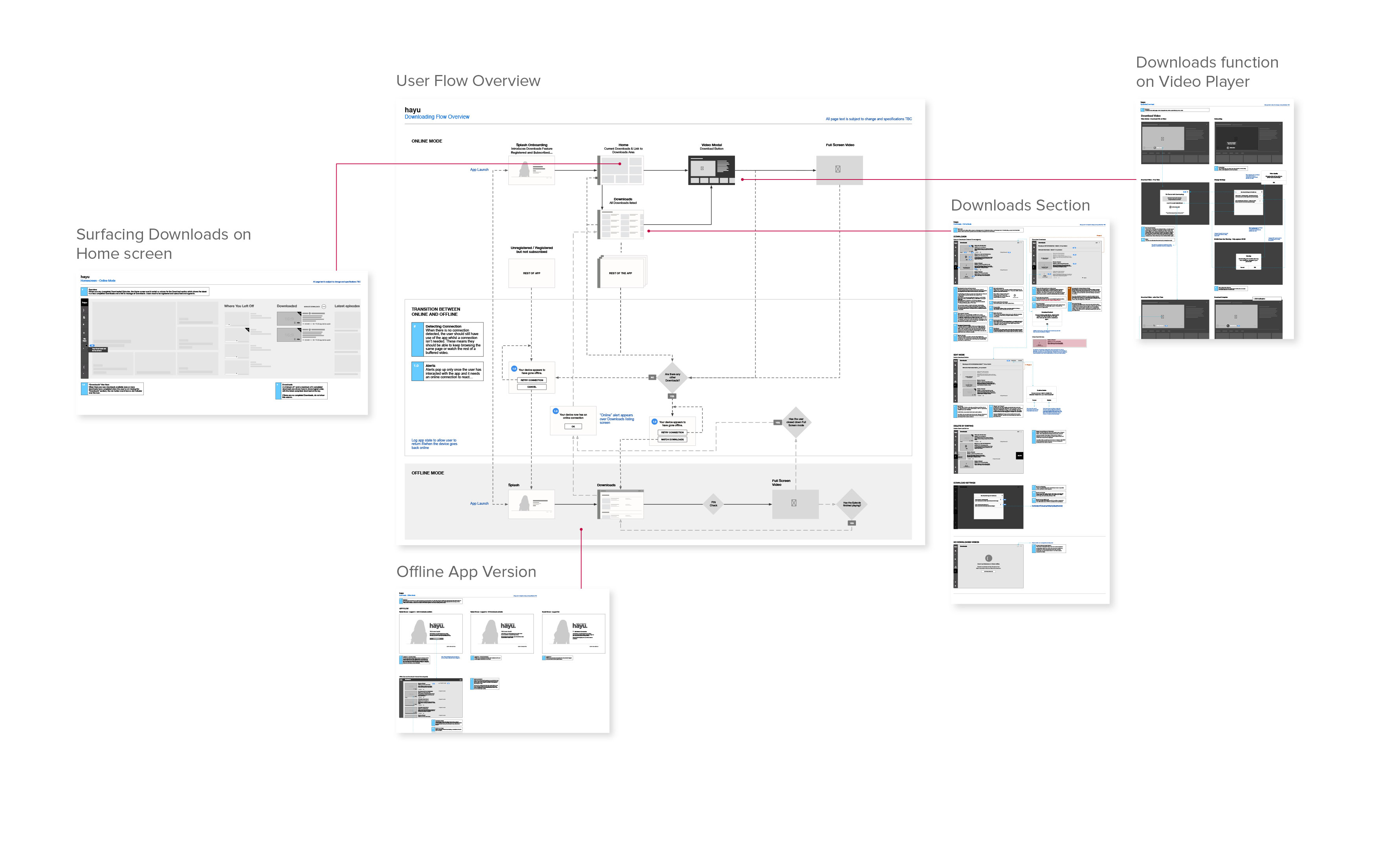 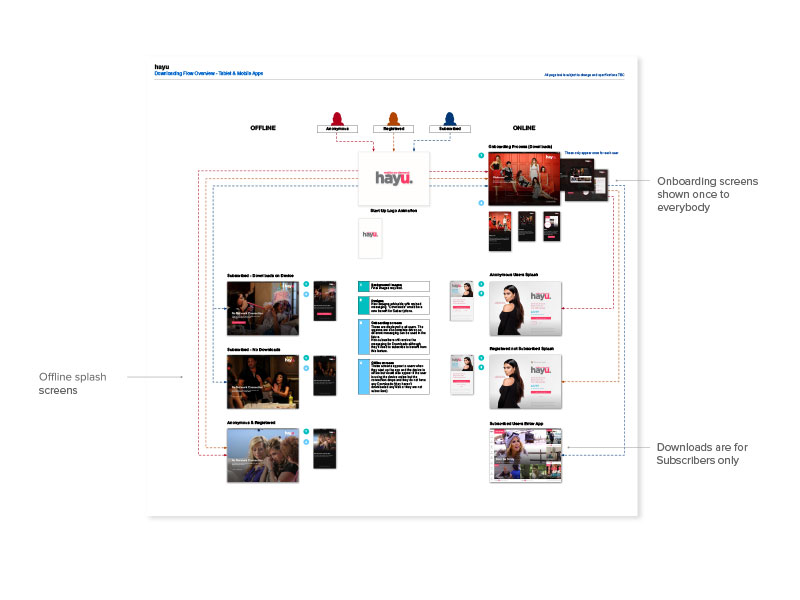 The new Downloads feature brought significant updates but customers needed to be onboarded as early tests showed they were initially confused about where the feature was.

A design studio gave insights for a number of features to incorporate. User flows for different customer subscription states were mapped out. Splash screens for the offline app were added to explain the new offline app status. Onboarding screens for when the app was online were integrated - these had to be closely aligned to the existing flow to minimise development time.

The user flow ensured the functionality was as expected by stakeholders and that external developers knew how to evolve the current app. The new offline splash and onboarding screens were more successful at promoting the new Download feature to both new and existing customers. 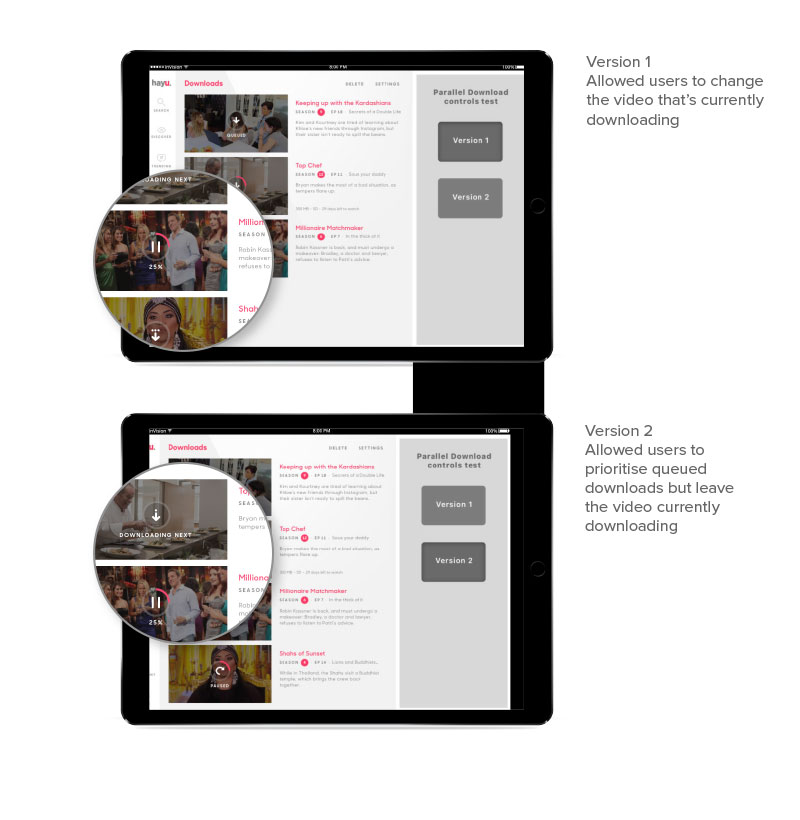 A key feature was controlling downloads of multiple episodes by starting, pausing and setting priorities but it was tricky to get right.

Competitor analysis and existing download features, technical feasibility of the Hayu platform and user stories resulted in two approaches to queued downloads. Invision Prototypes were built to model these approaches and then tested.

The simpler route recording a slightly higher preference. This was also cheaper to develop so was chosen as the route to build. Testers also gave ideas for future functionality and their feedback on the download icon designs.

The Downloads feature was released in November 2016 (a few months after Hayu launched) on new iOS and Android apps allowing subscribers to watch Hayu anywhere offline and this boosted it’s marketing appeal, well in time for Christmas.

The Download experience was perceived to be integrated well with the existing app features and layouts, enhancing the overall experience with the added functionality. Customer feedback was especially positive and vocal on social media, supported by increasing numbers of downloads watched. 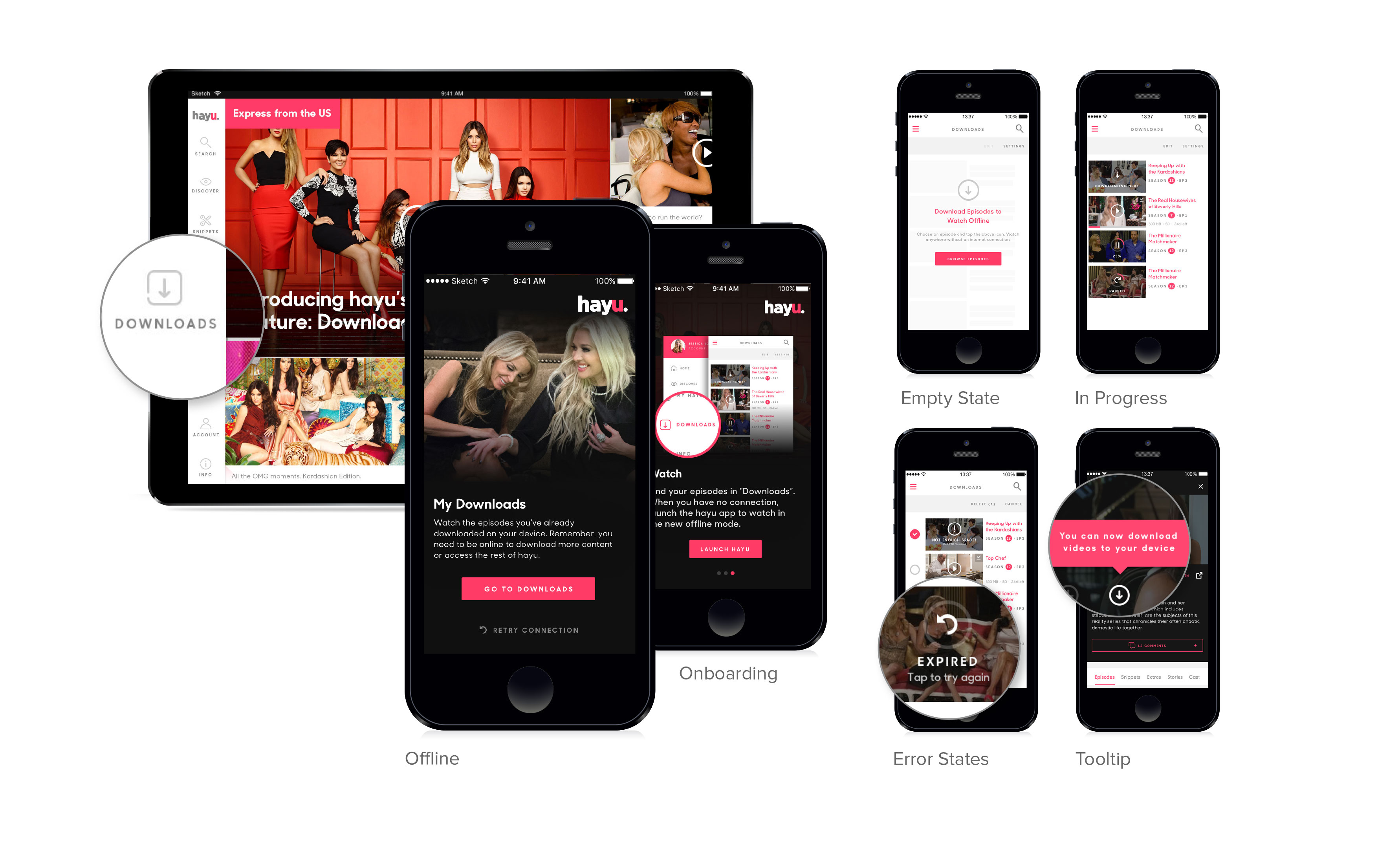